Home Pastry World Think small: Some of the best desserts in Atlanta are being made...

At Heart Panadería
Teresa Finney started making conchas in 2021 “basically as a way to impress my grandpa back home in California, who has a notorious sweet tooth,” she says. A freelance writer and recipe developer when she moved to Atlanta from the Bay Area in 2015, Finney worked for a while doing merchandising for Kroger but lost the job during the pandemic. She started baking a lot, which led to At Heart Panadería, its name an “homage” to her grandparents and great-grandparents, who immigrated in the 1960s from Guadalajara, Mexico, to California. Mexican pan dulce—beautiful conchas, particularly, in flavors like raspberry and chocolate—are at the heart of At Heart, but Finney’s got a wide range, also selling sweets like piloncillo cinnamon rolls with spices and orange zest. In 2022, she’s set to expand into savory options, such as empanadas with potato, poblano, and homemade queso fresco. Find out about upcoming pop-ups on Instagram.

Kaisu Bakehouse
Katarina Su made a name in the local pop-up community with her dumpling business, Kat’s Dumps, but this past fall, she shifted to another crowd-pleaser: Rice Krispie treats. “Rice Krispies is something everyone really identifies with,” says Su, whose family is from Taiwan, and who calibrates her flavors to hit a diverse array of nostalgia bones: Kaisu Bakehouse’s flavors have included the Chinese milk candy White Rabbit, the Japanese snack sticks Pocky, the Belgian cookies Biscoff, cookies and cream, matcha-strawberry—the list goes on, with Su constantly rotating in seasonal specialties. Find her at pop-ups by following her on Instagram (@kaisubakehouse) or place an order through her website.

Osono Bread
One reason to get out of bed on Sunday: You’ve got to be an early bird to catch the doughnuts Betsy Gonzalez sells at the Grant Park Farmers Market. Formerly a baker at Little Tart, Gonzalez founded Osono Bread in Southwest Atlanta after a rigorous course of self-education that included several months in Europe, where she apprenticed under bread bakers in six countries. Gonzalez learned not just about the magical alchemy of flour and water but also, she says, “the philosophies of investing in agricultural systems, food economies, and learning that establishing relationships with farmers and growers can actually bring forth change.”

When she launched Osono in 2018, it was with a similar commitment to local growers—Gonzalez uses flour from Georgia and North Carolina wheat. A little over three years later, Gonzalez still bakes out of her home: With two bread ovens and a dining room converted to a production space, she makes up to 250 loaves to bring to the market every Sunday. In 2021, she added doughnuts, in flavors like matcha, horchata, and salted caramel, and sometimes decorated with flowers.

Shirini Bakery
It started with a macaroon: Nela Salehi’s father used to bake a version that “had everyone on the floor” whenever they tried one, she says. As adults, Nela and her sister, Zara, developed their own take on the chewy cookie, which they sell these days through a bakery they operate out of the shared commercial kitchen space Prep Atlanta. It comes not just in classic Persian flavors (e.g., tart barberries) but in a wide variety including matcha and birthday cake. And the macaroon is just the beginning of the Shirini menu, which is available for pickup and delivery in Atlanta and ships nationwide: The sisters’ Goli cake, for instance, is based on a rich but light, highly aromatic—and highly delicious—combination of pistachio and rose.

Three Lolas Bake Shop
Jen Almanza, who moved to the U.S. from the Philippines at age 10, began making Filipino pastries as a way to “hold on to those memories” of the snacks she ate as a kid. She adds her own spin, though, and no small amount of artistry: Through this pop-up, Almanza sells gorgeous creations often hued purple from the use of the vibrantly colored yam ube. Her gooey ube blondies are some of the best around—but don’t sleep, either, on her ube and rosas cookies, her guava jam pop tarts, or her versions of Filipino desserts like sans rival cake, a mix of nut-filled meringue and buttercream. “I want to play around and do things my own way, but still honoring the ingredients,” Almanza says. She sells her treats at pop-ups, and lately on Fridays at Kinship in Virginia-Highland.

Almanza is one of a growing number of Filipino bakers and food businesses in Atlanta—among them Kamayan ATL, a well-loved pop-up that’s set to become a BuHi brick-and-mortar in early 2022. When it opens, Three Lolas will have a regular presence there as well. The small community of food artisans is more convivial than competitive, Almanza says: “We just want all of us to succeed, because we want it to stay. We want Filipino food to be a thing here in Atlanta.”

This article appears in our February 2022.

Osono Bread’s doughnuts are worth the wait 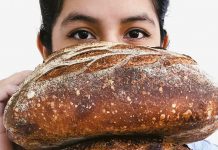