If you follow a lot of foodie Instagram and Facebook pages, you might have seen seen the snaps of extra large soup dumplings—ones so massive that you need a straw to sip the broth. Good news: I found one locally at China Kitchen in Atlanta’s Chinatown. The food stall has been around for ages, but they are banking on this new trend. They even have a stylishly produced video spotlighting the monster soup dumpling playing on a loop in the stall.

As you can see from the photo above comparing the oversized dumpling to its regular brethren, this is no ordinary soup bun, and only a limited quantity are available each day. And be patient—it takes about 30 minutes to cook once you order. The dumpling, which fills an entire steamer basket, is filled with a relatively bland soup with some ground pork and shrimp. Poke holes and sip out the soup through thick bubble tea-like straws before devouring the meat and dumpling skin.

While the XXL soup dumpling was a fun culinary excursion for the Instagram snap, the traditionally sized soup dumplings are what you should make a meal out of here. Although our order of soup dumplings was oversteamed, the flavor of the filling—with pork and hints of ginger and green onion—was perfect. The steamed pork dumplings are also worth ordering, with a thicker but still tender skin. They arrive with a luxurious coating of chili sauce and a shower of green onion and sesame seeds. They also managed to stay the freshest the longest on the table. Dumplings can often deflate and slump onto the plate, but not these. The sauce kept them plump.

Being the noodle fiend that I am, I also ordered the Szechuan cold noodles, which are advertised on a sheet of paper rather than the actual handwritten wall menu. The egg noodles arrive on top of the chili sauce, so you have to stir everything up with a spare pair of chopsticks to get everything incorporated just right. 5385 New Peachtree Road, Chamblee, 678-860-2777 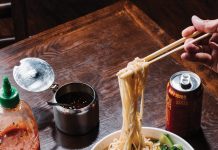