Hot Dish
Ribeye cheesesteak
Meet the defining sub at Fred’s Meat & Bread, Todd Ginsberg’s stellar sandwich stall in Krog Street Market. Ginsberg originally planned to serve strictly burgers until he and his partners remembered the Philly cheesesteak. “Like the burger, it’s another all-American sandwich you grew up with,” Ginsberg says. “I also thought it could be improved upon.” Improve he did. The nine-inch cheesesteak is a vision of sliced ribeye, white American cheese, and onions. It’s a rich stunner nestled in a soft hoagie roll from Rob Alexander, Ginsberg’s bread master at the General Muir. 99 Krog Street
— Evan Mah

Sweet Treat
Life of Pie
After a season of selling at farmers markets, Pie Local’s original owners decided to focus on their day jobs instead, leaving baker Jordan Ronis without a gig until his parents pitched in and helped him buy the company last spring. With the support of his brothers, Travis and Jared, Jordan sold more than 5,000 pies at the Grant Park, Piedmont, and Sandy Springs farmers markets. Made from local and/or organic ingredients and saddled with names like Berry Seinfeld and Pecan’t Handle the Truth, the pies sell for $22 for a large that serves six to eight and $12 for a small that serves two to three—“or really one; I’m not here to judge,” says Jared. Order at pielocal.com.
— Deborah Geering

Hot Shop
Wine at Cakes & Ale
Cakes & Ale recently opened a small wine shop in its bakery next door. The restaurant’s whip-smart sommelier, Jordan Smelt, handpicks the 85 or so labels available for purchase. The selection is heavy on the Old World, especially France. All wines offered by the glass in the restaurant are available for purchase at the shop. 155 Sycamore Street, Decatur
— Evan Mah

This article originally appeared in our February 2015 issue as a part of On the Table.
Advertisement 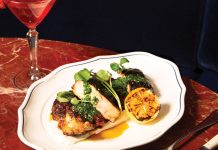 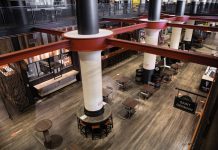