Home Uncategorized Twain’s to take over Suburban Lanes to create a vintage bowling and...

After more than 20 years in Decatur, the owners of Twain’s Brewpub & Billiards are opening a second entertainment venue this fall. Comet Pub & Lanes will replace the existing Suburban Lanes with a bowling, amusement, and dining spot similar to the Painted Pin but with a “funkier, vintage” vibe, says co-owner Ethan Wurtzel. “We think that kind of nostalgia and fun vibe will dovetail really well with the food and beer,” he says.

The venue will have 32 lanes and vintage arcade games like pinball, plus shuffleboard and pool tables. About 90 percent of the space will be remodeled to include reclaimed church pews as on-lane seating, couches, and a bar made from a reclaimed bowling alley.

“Ben Horgan, general manager and partner at Twains, had bowled in high school and college so he had a connection to it,” Wurtzel says. “Plus, there’s a lot of tie-in to what we do at Twain’s as far as how you can entertain people with food and drink and casual activity.”

To round out the concept, Wurtzel’s team is adding a full kitchen and bar. “Nothing overly fancy, but you’ll get the kind of food you’d expect if you went to Twain’s or anywhere in Decatur,” he says.

Twain’s executive chef Savannah Haseler is designing a menu with sandwiches, pizza made with hand-mixed dough, and stacked burgers made from White Oak Pastures grass-fed beef on Ratio Bakery buns. Some entrees will be available as well. “The food will emphasize locally sourced products where possible, and craft beer will be our drink of choice, as we are a brewpub,” Wurtzel says.

Although beer won’t be brewed onsite, the Comet will offer 15 to 20 brews on draft, plus a “healthy bottle menu.” Wine will be available by the bottle and by the glass. Cocktails will emphasize American craft distilled spirits. There will be a few specialty drinks to round out the otherwise traditional cocktail menu. 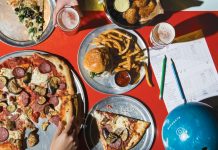 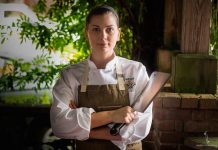