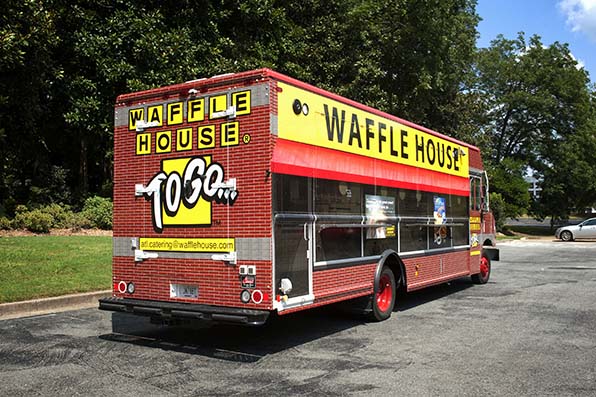 Earlier this month, WaHo started bringing plates of joy to disaster stricken areas with a new food truck specialized for disaster relief. The company contracted David Ford of Food Trucks South to create a truck that would not only hold the ambience and productivity of a brick and mortar location but also could be used to assist areas affected by natural disasters. Recently, we got in touch with Ford for more details about the truck and how it will be utilized.

Where did the inspiration for this truck come from?

I think Waffle House’s Chairman of the Board is the one who came up with the idea. They started looking at trucks about three years ago before they went and pulled the trigger on it. They came to me with the idea around August or September of 2012, and it’s the first disaster relief food truck they’ve had.

How will this food truck double as a disaster relief vehicle?

They have so many stores on the coast, and they want the flexibility to go wherever there’s a storm. Once a hurricane hits, they send out a truck with a generator and an electrician to wire up a store. It’s really a service, believe it or not, because it gives the media and locals a place to eat. They’re there early with the Red Cross. They’re doing it to make money, of course, but they’re also doing it to give back to communities hit by tornadoes or hurricanes.

Will the truck be used for anything else?

They’ll be able to go into areas like gulf ports to open and serve people that have been displaced and so forth. It will be used for catering as well.

Can you describe the truck itself?

They designed the layout to be like a store. We took their drawings and fabricated everything with their designs. The Waffle House logo is on the roof of the truck, too, so when helicopters are flying over the disaster with news media, they will see the truck feeding people. It’s like a full on restaurant inside with a full grill and waffle irons. The menu will be something fairly close to normal stores.