Westside Provisions District—home to JCT Kitchen, Taqueria del Sol, Marcel, and more—is getting four new stores in the next year. In September, nail spa Nouvelle will move in next to West Egg Café, followed by a men’s barbershop called the Commodore opening next to Dtox Organic Juice. In early 2019, the team behind Buckhead’s Storico Fresco will open a yet-to-be-named Roman restaurant in the lower-level courtyard. Lastly, in the spring, Tal Baum, owner of Bellina Alimentari in Ponce City Market will launch an Israeli restaurant called Aziza underneath Marcel.

Unnamed Storico Fresco restaurant
The 3,840-square-foot restaurant from Pietro Gianni and Michael Patrick of Storico Fresco will feature some items currently offered in Buckhead. These may include bruschetta, arancini, fried artichokes, cacio e pepe, and carbonara. Patrick, who will serve as executive chef of both restaurants, also plans to introduce new menu items, which will likely be inspired by an upcoming trip to Rome. Gianni says the items will be smaller than at Storico Fresco, to allow for more tasting and sharing.

The restaurant will have the same wine program as Storico Fresco. It will also serve bottled Italian craft beer and cocktails such as negroni and aperol spritz. Gianni describes the space as “very bar-centric.” It will have cement walls, wooden ceilings, a long bar that stems off the kitchen, and a big patio.

“We want to do something where people can bring dogs and children in the outdoor space,” Gianni says. “We want to activate the garden in a way people can come hang out and chill, [like] with a firepit and water features.”

Aziza
Similar in size at 3,938 square feet, Baum’s restaurant will pay homage to her childhood in Israel. Serving lunch and dinner, it will have a chef-driven menu that reflects Israeli and Middle Eastern cuisine.

“I was born and raised in Israel. Most of my family still lives there,” she says. “It’s time to go back to my origins and showcase this beautiful cuisine.”

She’s designing the menu based on the Israeli hospitality tradition of sharing, and says Aziza will be a place where diners “eat with all their senses.” To take Israeli cuisine to the next level, she’ll put modern tweaks on personal recipes, with items such as whole leg of lamb cooked in a wood-burning oven, tagines, and salads. There will be Israeli and Californian wines, local and Mediterranean craft beers, and specialty cocktails made with Mediterranean liquors.

Smith Haynes Studio is designing the space using natural materials and dark colors. Outdoor seating will be available, and Baum says the private dining room will be the “jewel of the space.”

“That area has really good, night owl life, with a young crowd looking for exciting flavors and new experiences,” Baum says. “That’s what the concept is going to be.”

But that’s not all. Baum is opening a more casual Israeli concept called Rina in the Ford Factory Lofts near the Atlanta BeltLine in spring 2019. (Rina means happiness in Hebrew; Aziza means happiness in Arabic.) Rina will offer fast table service with a menu featuring skewers, falafel, sandwiches, and salads. 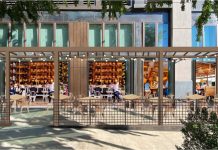