Husband-and-wife team Patrick Berry and Steffi Langer-Berry never intended to be grocers. Their backgrounds are in photography, graphic design, and website development. But when they moved to Westview in 2006, they got involved in the community organization and saw how everyone embraced the small grocery store at 1562 Ralph David Abernathy Boulevard.

“The store has always served a very important function in the community, as some people don’t have cars,” Berry says.

In 2009, the grocery—which originally opened as Kroger in 1949 and changed names throughout the years—turned into a convenience store. “It went downhill a bit. It didn’t really have groceries anymore,” he explains.

Seven years later, the person running the store wanted to break the lease, and the couple “saw an opportunity to return to a grocery store that many people in the community had been asking about for years,” Berry says. “Our goal was to make sure the center remains a community-focused commercial spot.”

“The greater West End is focused on vegetarian and vegan. Natural and organic food seemed like a good concept, but it’s important to us to keep conventional food as well,” Langer-Berry says.

She explains that customers can easily find Bush’s beans, Blue Plate mayonnaise, and other conventional brands at Westview. Fresh grab-and-go items from the Grant Park Market are also available daily. The offerings rotate but may include grilled cheese, lemon pepper chicken, tuna salad, and shrimp and grits. (Greg Hutchins of the Grant Park and Candler Park markets is an advisor on the project.)

Langer-Berry describes the 4,000-square-foot space as having a country store feel with picnic tables inside. There’s unused space available for a restaurant in the future. In the meantime, Westview Corner Grocery has been hosting a pop-up in the parking lot every other Saturday with Che Butter Jonez food truck, which serves dishes such as lamb burgers, fries, and sauteed Brussels sprouts. (The next Che Butter Jonez pop-up is June 30.) 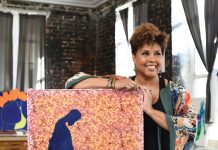