13 Questions is a weekly series where we ask chefs 13 questions to get to know them outside of the kitchen. Maria Moore Riggs is the founder and owner of Decatur’s Revolution Doughnuts.

Why doughnuts?
The first time I ever had a doughnut I loved was at this outdoor eastern Pennsylvania Amish market—that set the bar for me. Moving to the South, there’s a big doughtnut-eating culture here with Krispy Kreme, and I just felt like we could do a better job. I had a failed a coffee shop in the Sweet Auburn Market where I made scones, then I just started selling at area farmers markets. Little Tart and I were both making scones and muffins, but doughnuts were the thing that would sell out first.

What’s one thing you wish you knew how to bake?
I’ve tried every biscuit recipe on the planet, and I think I’m a pretty good biscuit maker, but for some reason they never turn out like the biscuit of my dreams: flaky, buttery, layered, that perfect balance between light and dense. Maybe they’re impossible to make.

If you weren’t a baker what would you be doing?
I’ve had two former careers: I was a massage therapist for 10 years and a psychotherapist for six years. I’d probably still be doing psychotherapy if I hadn’t gotten sidetracked by food. I was working at a bakery while going to grad school, but I kind of burned out in psychotherapy—it’s very sad and emotionally draining. Baking was kind of my outlet.

Do you have a favorite doughnut pop culture icon?
Eric Joyner, an artist that does a lot of oil paintings of robots and doughnuts.

What’s your fast food guilty pleasure?
I’m addicted to Chipotle. I eat there like five days a week—a salad bowl with chicken and pinto beans.

What do you do in your free time?
I’m an aggressive house remodeler. We’ve been working on our current home for two years, and we just bought another house and have been working on that for the last year [both in Decatur]. And being in the garden trying to grow things for the shop. We grew our own jalapeños this year and globe basil. Every year, I grow tomatoes, but the squirrels always eat them.

What was the first thing you ever baked?
The very first thing I ever learned was making cookie batter when I was six or seven. Every Monday, my mom and I would make oatmeal cookies for the week. I learned techniques from my great uncle, who always made things from his garden like lemon meringue pie from the lemons in his garden. He was the guy who taught me how to make pie crust.

What’s the weirdest doughnut you’ve ever come up with?
Our hot dog doughnut, which was completely inspired by how good the Spotted Trotter hotdogs are. We only serve it a few times a year. Our biggest failure was Georgia peaches in fritter. It just doesn’t work; they’re just too wet.

What’s the last TV show you bingewatched?
House of Cards

You grew up in California, so was there any culture shock moving to the South?
It was a positive culture shock of just how slowed down and social people are. Where I was living [in San Francisco], people really would congregate at the coffee shops and talk about the houses they were buying, the cars they were buying, or how they were surviving in the economic climate. For us to come here and feel like we could open a business, we could own a home, and have a lifestyle of raising our child and not working 24/7 was great.

Does your seven-year-old son, Rocket, ever help out in the kitchen?
He comes in, puts his apron and hat on, wants to pound butter—that’s his favorite thing, pounding butter for crodoughs.

What would you eat for breakfast other than doughnuts?
My new breakfast is this green powder that has every kind of kale and wheatgrass in it, almond milk, cashews, agave, and cinnamon. I put MCT oil in my green drink. I try to eat only one or two doughnuts a week, but those crunchy misters are hard to resist.

What’s next for the shop?
A lot of people ask us for doughnut holes, so we did make a minor concession. We decided we’re going to do cider [doughnut] bites. They’re basically like a buttermilk doughnut with cider rolled in cinnamon sugar. We’re also working on opening second shop, hopefully in Inman Park. 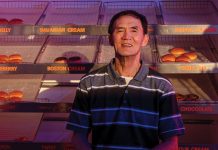 Mochibees opens in Duluth with a wide variety of mochi doughnuts