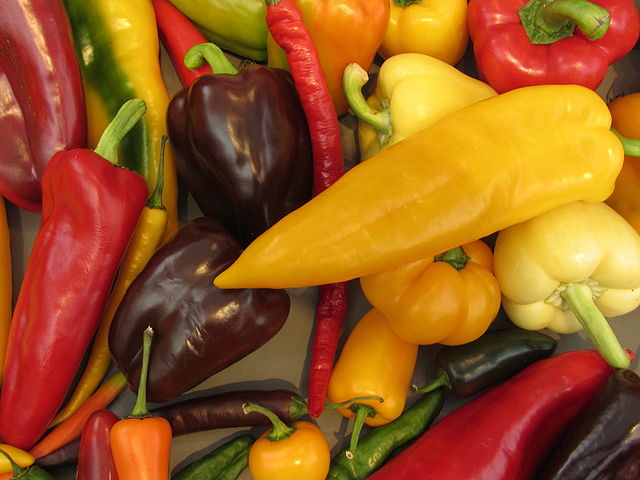 Here’s what I’ve learned over this strange summer: You can pretty much always count on a pepper.

Tomatoes may come and go; squash may wilt and melons may rot and even okra may slow to a snail’s pace, but those peppers, well they just keep coming. They may have ripened a little slowly, but all around Atlanta, they are holding their own in gardens and farmers markets.

In a more normal year, peppers are just part of the late summer bounty, a colorful flash in a sea of deep greens and purples and burgundies. But this year they are a staple, and that makes them stars.

Most of us don’t have that many pepper recipes in regular rotation, though. After you’ve added a few slices of raw peppers to a salad, and maybe made your grandma’s classic stuffed pepper recipe, what else can you do with them? Lots of things. Slice and sauté with Italian sausage, and maybe some onion, to fill a killer hoagie. Stir-fry with cubed butternut squash, onion and a splash of soy sauce, and serve over brown rice. Roast, peel, slice and layer in lasagna. Roast, peel, puree and freeze in ice cube tries for later use in everything from soups and sauces to hummus and salsa.

Or, try the recipes below.

“This smoky, velvety salad has the color intensity of fall in all its glory,” writes David Tanis in “A Platter of Figs” (Artisan, 2008).

Roast the peppers over an open flame, either a wood fire or on the stovetop, or under the broiler. Try to get the peppers as close to the flame as possible so their skins will blacken and blister quickly. Turn the peppers frequently with a pair of tongs so they roast evenly.

Spread the peppers on a baking sheet so they can cool to room temperature. When the peppers are cool enough to handle, split them top to bottom with a large knife. Scrape the seeds from the insides, then turn each pepper half over and scrape away the charred skin. When all the peppers are scraped, slice them into 1-inch-wide strips and put them in a bowl. Season with salt and pepper and toss well. Add the garlic, capers, and a teaspoon or two of red wine vinegar. Drizzle lightly with olive oil. Toss again. Don’t refrigerate the peppers – it will kill their delicate flavor. Leave at room temperature, up to several hours.

To serve, taste and adjust the seasoning, then mound the salad on a platter. Garnish with the olives. Drizzle with a little more oil. Decorate with basil leaves.

I’ve held on to this recipe over the years because of its beautiful simplicity. If there were ever a time of year to enjoy peppers just for being peppers, this is it. From Eileen Yin-Fei Lo’s “From the Earth: Chinese Vegetarian Cooking” (MacMillan, 1995).

Heat a wok over high heat. Add the peanut oil and salt, and use a spatula to coat the surface of the wok with oil. When a wisp of white smoke appears, add the garlic and stir for a few seconds. Add all the peppers and stir-fry until very hot, about 2 minutes. Serve immediately.

All sorts of Mediterranean ingredients come together in this hearty pasta dish from Deborah Madison’s “Local Flavors.” (Broadway Books, 2002) If you’re not a big eggplant fan, just eliminate it and instead double the peppers.

Preheat the broiler or grill. Lightly brush the eggplant with oil. Broil or grill it on both sides until browned, 12 to 20 minutes per side. Remove and cut into wide strips. Lightly oil the peppers, then grill or broil, skin side toward flame, until blistered. Remove from heat. Stack them on top of one another to steam for 15 minutes, then peel and dice into small squares.

Heat the ¼ cup olive oil in a Dutch oven on the stove. Add the onion, peppers, garlic, anchovies and parsley. Saute over medium-high heat until the onion is softened, about 5 minutes. Lower the heat and add the eggplant, tomatoes, olives, capers, oregano, and ½ water or juice from the tomatoes. Season with salt & pepper and simmer for 30 minutes.

Cook the pasta in a large pot of boiling salted water, then drain. Transfer to a serving bowl. Spoon the sauce over the pasta and top with cheese and more chopped parsley. Toss before serving.