Home Uncategorized Where to eat late at night in Atlanta? Ask a bartender

Tyler Reddick knows the city’s nocturnal side. The Atlanta native, who both lives and works off of Ponce de Leon Avenue, mixed drinks at the Sound Table and Edgewood Avenue’s Corner Tavern before joining Bon Ton’s opening staff in 2017 as a bartender (he’s now bar manager). Bon Ton’s ambitious, New Orleans–inspired cocktail program keeps Reddick slammed throughout the night—which means, on weekends, he typically doesn’t clock out until the wee hours. At the end of these adrenaline marathons, he’s too amped up to head home and pass out. So, after pouring drinks for his staff, locking the doors, and turning off the lights, Reddick often goes out: to a smoky dive for cheap beer and fried potatoes, to a zen-like space for a refined cocktail and fancy snacks, or to a 24/7 taco joint that’s nowhere near Ponce but worth the trek by virtue of its gargantuan, cheese-shellacked quesadilla (and its drive-thru). Sometimes, on a night like tonight, it’s all three.

Reddick is sipping a Topo Chico and chatting with bartender Nick Chaivarlis when I meet him inside the dark, seductive drinking den that is Ink (a few weeks later, it would switch concepts to a natural wine bar from the same owners; what’s described here, aside from the cocktail, remains on offer). “This is usually my first stop after leaving work because it’s quiet,” Reddick says. “I can ease out of work here. This is my zen.”

“This is par for the course for me: to have a little nibble, especially after the rush from work,” Reddick says.

Once we’ve mostly vanquished Reddick’s snacks, Chaivarlis pours shots for Reddick and bar manager Joshua Fryer. Sniffing his glass, Fryer describes its aroma as “a caraway cloud.” It’s Icelandic aquavit; native Icelanders, Fryer tells me, affectionately call it Black Death. Seems like a good omen. We drain our glasses and head to our next stop.

Righteous Room is packed, so we claim barstools on the patio. A server brings Reddick a Miller Lite. “I’ve been coming here in waves of frequency for about 10 years,” he says.

A lot of bars work too hard to engineer the mood, he adds, but that’s not the case here. In this era of meticulously curated Spotify playlists, Righteous Room’s jukebox is run by bar-goers with a few bucks to spare. As the jukebox transitions from Yaz to Beastie Boys, Reddick’s favorite Righteous Room nosh arrives: a small mountain of golden, salt-and-vinegar potato wedges. They’re crispy like French fries but more substantial, packed with what Reddick calls “baked potato goodness.”

The jukebox launches a Hall & Oates song as we settle up. It’s time to make our way north.

Jarritos and a Pizza-Dilla at Mama’s Cocina Latina

The parking lot at Mama’s is almost full, and the restaurant is abuzz with hungry night owls posted up with carnitas tacos and Jarritos beneath fluttering Corona banners. Mama’s—which not only is open around the clock but boasts a crucial drive-thru—is a rare, fluorescent-lit gem. Especially for people who clock out as late as 3 a.m.

Reddick has been hitting up Mama’s and its predecessor, Taco Cabana, for about 15 years. “I used to live a quarter-mile from here, so Smith’s Olde Bar was the first bar I drank at, and this was the first restaurant I’d stumble to afterward,” he says.

We pluck a couple mandarin Jarritos from a big ice chest and order a bunch of dishes, including Reddick’s favorites: huevos rancheros and a quesadilla.

The cashier shouts our order number over the intercom, and we schlep the feast on a couple of plastic trays toward our corner table, making a quick detour to the condiment bar for tiny plastic thimbles of salsas verde, negro, and habañero.

Reddick loves Mama’s huevos rancheros for the shatteringly crunchy, near-burnt bacon piled on top. And that quesadilla is a monster. Rather than folding one tortilla in half, the Mama’s way is to double up with two tortillas, mortared together with a thick layer of cheese. “It’s basically the size of a pizza,” says Reddick—such that, if you hit the drive-thru, Mama’s serves it in an actual pizza box. 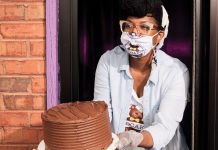