Home Local Foods Where Wheat St. Garden Apartments stood, a new garden grows
In the vacant lot at the corner of Hilliard and Old Wheat streets in downtown Atlanta, you can still see the concrete pads where the Wheat Street Garden Apartments—a low-income housing project built by the historic Wheat Street Baptist Church—once stood. But just a few days after the announcement of an exciting new project, the pads were already covered with raised garden beds filled with rich earth.

The church is leasing the land—four acres in the center of Sweet Auburn—to Truly Living Well Natural Urban Farms to bring good food and gardening education to the neighborhood.

On Saturday afternoon, Truly Living Well founder Rashid Nuri was still waiting to sign the paperwork. But he was already on location with a small army of workers and volunteers—supervising the demolition of an old asphalt lot, cutting pine boards for the garden beds, and greeting a steady stream of well-wishers and the curious, like myself.

“This picture has been in my head for a long time,” he said. “I need to get at it; I’ve got no time to waste.”

He beckoned for his CFO—chief farming officer —Eugene Cooke to put down his wheelbarrow for a few minutes, and together the two men described their vision for the place: 100 fruit trees lining two edges; rows of planters for classes and school groups; community garden raised beds; smaller, taller beds for wheelchair-bound gardeners; honey bees on a hillside; a field full of vegetables; clusters of living color that come and go with each crop. “The site will constantly be changing as the season changes,” Cooke said.

It will be a lush oasis in the middle of the city, but it will be so much more than that. A source of good food in a neighborhood that’s short on grocery stores. A place to learn where food comes from and how to grow your own. An opportunity for some to pay for top-quality produce with work, not cash. And a place for neighbors, downtown commuters and the larger community to connect over something that unites us all: the love of a good meal.

“In a lot of ways, this in an extension of the mission the church already had,” said Nuri of his new landlord. Founded in 1869, Wheat Street Baptist Church has long been a leader of activism and economic development as well as charity, building housing, feeding the hungry and even operating a credit union.

Like the 5-year-old Truly Living Well’s other sites in East Point and Riverdale (this property doubles its cultivable land) Wheat Street Gardens will also sell produce to restaurants, weekly subscribers and walk-up customers.

The seed money for the project is coming largely from the Atlanta Falcons Youth Foundation, whose missions include fitness and the prevention of childhood obesity. At the groundbreaking ceremony on Sunday, the foundation was on hand with one of those giant checks, representing a $50,000 grant. Gratitude was also expressed to the church’s Wheat Street Charitable Foundation, the Environmental Protection Agency (a financial supporter), and deal facilitator Kwanza Hall, a longtime friend to the local food movement whose City Council district includes the new farm.

By phone on Saturday, Hall told me he isn’t done advocating for the project. “I think that other supporters will come to the table once they see what we want to do,” he said.

His enthusiasm will come in handy, as Nuri’s wish list is long. He needs volunteers, fencing, hoop houses, a walk-in cooler, a wood chipper, an irrigation system. And of course, cash. A half-million bucks will do it, he thinks.

“If I can get the money, we can do all of this. I’m going to go full-bore,” he said, turning into the cuttingly cold wind to admire the property’s view of the Atlanta skyline. “Look at how pretty that is.” 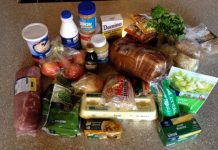 What I learned taking the food stamp challenge