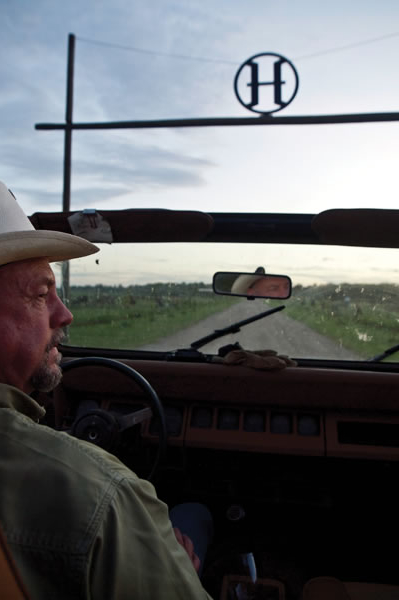 White Oak Pastures, the pioneering sustainable farm based near Bluffton, GA, will open a restaurant on the farm this weekend. To kick off the establishment’s opening week, Woodfire Grill chef and Top Chef celebrity Kevin Gillespie will be cooking a dinner sourced entirely from the farm’s grass-fed beef, pastured poultry, ducks, turkey, rabbits, and organic vegetables.

Should you get excited and decide to try to drop in on that stellar-sounding feast, think twice. The inaugural dinner will be served to a small group who won the evening in a recent Southern Foodways Alliance fundraiser auction. Starting Monday, the restaurant, which will be called Pasture to Plate, will begin serving the farm’s 85 employees and folks who drop in for lunch. The menu will consist of single plate option of what is fresh and available from the farm that day. Will Harris, the farm’s owner and fourth generation cattleman, says that he expects the restaurant to be able to serve more than a hundred patrons at a time.

That name, Pasture to Plate, may sound a little commonplace amongst the trendy farm-to-table vogue, but few places can claim such a direct and short connection. “The good news is that that [the restaurant] is right smack dab in the middle of a organic vegetable farm. The bad news is that it’s behind the slaughterhouse,” Harris said, chuckling slightly about the location.

White Oak Pastures is the only farm in the United States with both beef and poultry abattoirs on the premises. The facilities were designed by Dr. Temple Grandin, the woman whose pioneering work in the humane handling of livestock was later portrayed in a film with Claire Danes. The organic vegetable garden uses compost and other waste materials from the beef and poultry production.

Though Gillespie will only be cooking at the restaurant this weekend, Harris expects that some “friends and chefs” may drop in for occasional dining events in the future. When asked about the culinary style of the restaurant, Harris asked, “Do you know about Blakely Chicken?” referencing the nearby, roadside institution that has been serving for decades. “Well, it’s going to be exactly and I mean exactly halfway between five star, white table cloth dining and Blakely Chicken.”

Photo of Will Harris at White Oak Pastures gate courtesy of the farm.