For Erika Council, author of the hunger-stirring blog Southern Soufflé, one weekly meal embodies her lifelong love of comforting foods: Sunday supper. Picture a long, sturdy table where loved ones and visitors pass mismatched platters heavy with fried chicken, mashed potatoes, collards in their potlikker, cornbread with cane syrup butter, and Council’s personal obsession: biscuits. The mood is light, and the conversation flows; the fellowship is as gratifying as the food.

Such gatherings are a tradition in Council’s family. Her paternal grandmother, Mildred Cotton Council, has run Mama Dip’s Kitchen in Chapel Hill for 40 years, during which time she built a national reputation on the divine merits of her fried green tomatoes, sweet potato biscuits, and barbecued chicken. “If you talk to my grandmother, she’ll say, ‘I’m a country cook’—an evolution of the plantation cook,” says Erika Council. Her maternal grandmother, Geraldine Dortch, also took to the kitchen; she cooked up Sunday suppers in the 1960s for residents of Goldsboro, North Carolina, and used the proceeds to support the civil rights movement. “Southern food is rooted from black hands,” says Council, who is clearly inspired by both of her grandmothers.

Council moved to Atlanta in 2005 after several years in Louisiana, and since then she’s been finding ways to reframe the Sunday supper ritual—both in her own home and beyond. At first, her guest list included her husband, her two children, and maybe a friend or two, but soon word began to spread about her crisp-skinned, flavor-blasted fried chicken (sometimes brined in a mix of apple cider, mustard seeds, and chile flakes; sometimes marinated in buttermilk and hot sauce). “A friend brought two friends and then, next time, those friends invited someone else,” she says. “Eventually people showed up at my table that I had never seen before in my life!” By 2013 Council had taken her Sunday supper to various Decatur-area event spaces and restaurants; she continues the pop-ups today under the name Soul and Food Sunday Supper Club.

Although the idea of comfort—of connection and pleasure—anchors Council’s approach to cooking, she also considers food a gateway to tackling larger issues. “Lots of times, intolerance comes from indifference,” Council says, referring to the country’s ongoing racial tensions. “But if we can connect over comforting food, even if our stories are different and conflicted, a meal can move us forward.” She hopes to engender community by attracting diverse food lovers to her dinners.

Council has more to say on the topic of race than can be said over supper—especially when she has her hands in biscuit dough, which a cook has to do “to know whether you’re getting the ratios of flour and shortening and cream or butter just right,” she says. Southern Soufflé launched in 2012 as a space for her to deepen the conversation while sharing some of her most-loved recipes. In its archives, for example, you’ll find a post lamenting the shooting of Michael Brown in Ferguson, Missouri, that segues to a recipe for Mama Dip’s fried green tomatoes. This year Council’s piece “Comfort in Buttermilk Cake,” which details the time a police officer stopped her in Florida, was nominated for Saveur magazine’s annual blog awards for being unafraid “to tackle the challenges in our society.”

“I’m an old Southern soul,” says Council. “I know how to tell a story.” She also knows how to serve soulful comfort.

How to serve soul: Check out Council’s recipes for smothered pork chops and stewed cabbage 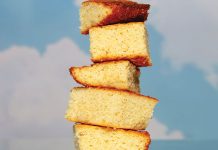