Home Uncategorized What you’ll find at the giant Glenwood Kroger 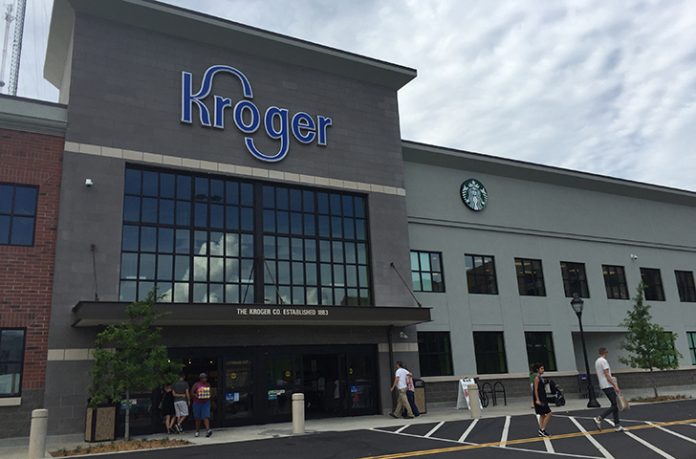 After more than a year of speculation that a Walmart would be coming to this site on the border of Grant Park and Ormewood Park, in 2014 it was announced that a massive Kroger would set up shop instead. This particular Kroger, however, is more similar to a Walmart than shoppers might expect—boasting, in addition to the normal grocery aisles, an expanded take-out area, a Starbucks, a kitchenware and household items section, an automotive aisle, and even a bar (which has led locals in the neighborhood to nickname it “Krobar”). A few weeks after the store opened, we went to check it out. Here’s what we saw:

Cheap (local) booze on tap
It’s possible to walk through the entire store and completely miss the bar, as it’s tucked away behind the sushi prep area in the store’s cafe, but the little counter is worth a visit. It features several (mostly local) beers on tap and an Enomatic wine system that allows the bar to serve 16 different wines by the glass. The prices are affordable, at $4 to $5 for a beer and $4 to $6 for a glass of wine, and the bartenders will offer samples of any beer or wine on the menu before you order.

The store also has a solid beer and wine selection. A spot near the Murray’s cheese counter—where it looks like future wine tasting events will be held—even advertises a “Wine Steward.” Beer drinkers shouldn’t pass by the make-your-own six-pack cooler, which boasts a much better selection of single bottles than most other Atlanta Krogers. And if you really want to indulge, an honest-to-God humidor in the wine section houses several boxes of cigars.

Fancy coffee
If you need some extra energy before perusing the aisles, you can grab a latte at the Starbucks. These mini outposts are popping up in larger Krogers as well as Marketplaces like this one.

Tons of take-out options
Kroger is trying to give both Publix and Chipotle a run for their money with a sandwich bar and burrito station along with the standard fried chicken fare. There’s also a wood-fired pizza oven and an expanded sushi station with “Pan Asian” bowls. Pay at a short row of self-checkout stations located just outside the entrance to the indoor-outdoor seating area. Bonus—the cafe has free Wi-Fi.

We also found a few barbecue smokers and pieces of patio furniture scattered throughout the store. But if you think that’s crazy, keep in mind that some Kroger Marketplaces go much further. In December, I visited a Marketplace in Indianapolis that featured an extensive clothing aisle for men, women, and children; even more toys (think: Legos); and two aisles of holiday decor.

“Fruity Yeast Rings”
We highly suggest a name change for this frosted yeast doughnut sprinkled with Froot Loops, found in a case near the take-out food area.

An actual portable CD player
It turns out, you can still buy these new. Use it as an opportunity to teach your kids about the era before iPhones, when anti-skip protection was highly coveted.

Useful services
In addition to the standard pharmacy, Glenwood Kroger also features The Little Clinic, a mini-clinic that, when we visited, was offering $29 sports physicals for students. There’s also a Kroger Gas station outside where you can burn off all the Fuel Points you’ve accumulated buying Fruity Yeast Rings and CD players.

So. Many. Beverages.
The store’s selection of cold drinks is better than that of any gas station. There are at least two full aisles of sodas, juices, teas, sports drinks, energy drinks, and flavored sparkling waters.