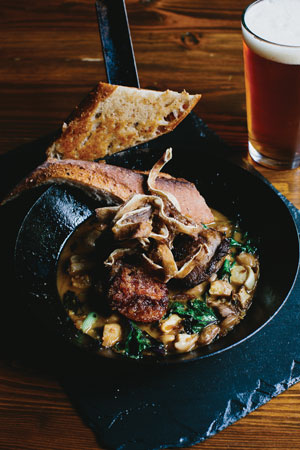 The Wrecking Bar Brewpub opened in Little Five Points on Father’s Day in 2011. Bob Sandage, a serious home brewer, and his wife, Kristine, spent almost two years restoring an 18,000-square-foot Victorian mansion (doing much of the work themselves), turning the main space into an event facility and the basement into a handsome tavern with stone walls, brick floors, and a sunny patio. It began unevenly: The bar bites were forgettable, and despite admirable effort, the beers—all made on-site and usually too hoppy or sweet—weren’t something I could recommend, particularly with the Porter Beer Bar (and its selection of 800 brews) right around the corner.

The food, however, has improved radically since Terry Koval arrived in August 2012. Koval was previously the executive chef behind the multiple Farm Burger locations and counts Gary Mennie (formerly of Canoe) and Nick Oltarsh of One Midtown Kitchen among his mentors. Like other can-do chefs of his generation, Koval pickles, butchers, sources local products, and cultivates a kitchen garden; he even hired two farmers as line cooks.

How’s the beer? I find most of the ten to fifteen choices (which rotate frequently but typically include a couple of IPAs, variations on stouts, and at least one porter) clumsy and inconsistent, though I’m also not a fan of brewpub efforts in general. I did appreciate a copper-colored English bitter the bar was recently pouring. Koval’s food keeps me coming back nonetheless. He is a chef who makes an honest restaurant out of a beer hall. 292 Moreland Avenue, 404-221-2600, wreckingbarbrewpub.com 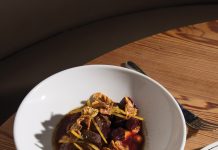