Home Drinks A mission to save Mondays at Monday Night Brewing 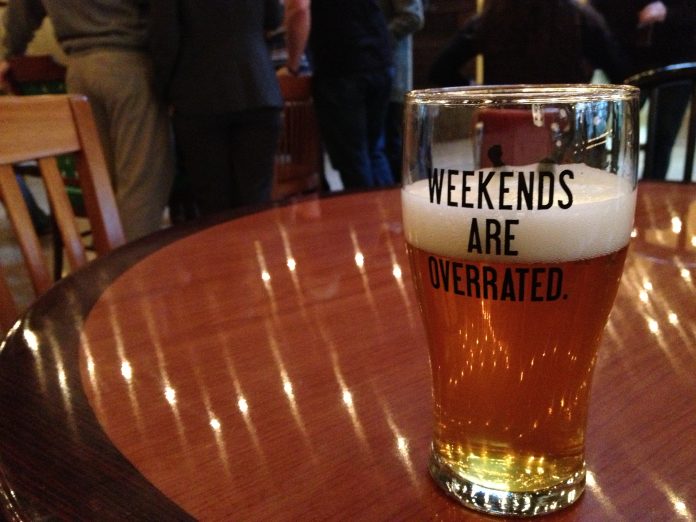 Local beer drinkers have fallen for Monday Night Brewing’s trifecta: the Eye Patch Ale IPA, the Drafty Kilt Scotch Ale, and the Fu Manbrew Belgian-style Wit, and the same is true of the brewery itself. Located off Howell Mill Road on the Westside, the company founded by Jeff Heck, Joel Iverson, and Jonathan Baker is a great post-work hangout, just as it was when the trio began brewing beer about seven years ago in the garage. A self-described group of white-collar guys with ties, they eventually followed their hearts (and palates), trading in the buttoned-up collars for the business of brew.

Monday Night Brewing gives tours on Monday and Thursday nights and Saturday afternoons. Visitors who bring a tie will get a $1 off the $10 admission fee, which includes a souvenir pint glass, four 8-ounce tastings, and of course, the brewery tour. I spoke with the companys’s marketing guy, Jonathan Baker, about what’s been happening over on Trabert Avenue.

Your brewery is gorgeous. What were you going for?
Our vision was to be the weeknight brewery. If you’re drinking on a weeknight you’re not pounding beers back. You’re most likely enjoying one or two beers with a meal.

You’ve got a shuffleboard, Space Invaders, and subtitled Asian movies coming through the projector. I think that was King Kong. That table was custom-made for us by Venture Shuffleboard in Peachtree City. It’s sitting on kegs, so the kegs are the table stands. And then there are bottle openers on each side, so it’s a true beer-themed shuffleboard. We’re trying to make it a fun place to hang out.

Hence, the super plush furniture. The tour I went on was particularly lively—there was an older lady talking about whether you could smoke hops. Oh my gosh, yeah.

Inappropriate comments can be fun. Are people usually that, shall we say, engaged? Some more than others! You’ve always got your home brewers in the room asking really technical questions about fermentation temperature and so on. Then you’ve got a girl in the room who only drinks wine, and is there with her boyfriend. So it runs the gamut.

What’s with the tie wall? Are people so inspired, they’re just quitting their jobs left and right? We were all white-collar guys. We’d come home on a Monday night, loosen our ties and brew beer. The loosened tie became a symbol for us, celebrating your day job with a beer in-hand at the end of the day.

Do you love being on the Westside? We all live over here and go to church here—we’ve lived here for the past four years or so. It’s a cool, cultural center right now and experiencing a lot of renewal. We wanted to be a part of that.

Any plans for a new beer style this year? We’re working on it now, it’s called Blind Pirate. It’s essentially two Eye Patch Ales—a double IPA. It’ll be around eight percent alcohol. We’re still tweaking the recipe. And we’re working on a coffee IPA with Batdorf & Bronson. They’ve got really cool lighter, citrusy roasts that don’t have that dark coffee flavor you would expect from a coffee beer. It pairs nicely with the bitter, citrusy flavor that you get in an IPA. It’s been fun to work with local vendors to create new things.

You got some new toys—a bottling line? Yes, it’s brand new equipment. We just learned how to operate it. Bottles will hit retail locations later this month.

There are mannequins descending from the ceiling at the entrance. Discuss. I was looking for a creative way to display our merchandise, and lower the ceiling height over that retail area. It kind of turned out creepier than we thought. And we haven’t had much time to properly fix their clothes, so there are just these undressed mannequins staring down at you.

Aside from the fact you get to brew and drink beer, what else do you love about your new-ish gig? Beyond the product itself, it’s really fostering community in Atlanta. Beer is a beverage that breaks down the walls between people. We have a cool place in that story, seeing organic conversations take place at the bar or in our brewery, over our beer.