Manglitz may be goofy, but he’s also a smart, driven guy. Raised on stories of his pawpaw’s moonshine, Manglitz started making booze in a friend’s barn as soon as he turned 18.

Now he makes whiskey in a more official capacity for ASW Distillery, where he’s just masterminded the first legal rye produced in Atlanta since before Prohibition. Resurgens, which launched in December, is an amber-hued single-malt rye whiskey made from 98 percent North American grain and aged in charred white oak barrels. The label’s red phoenix is a nod to both the City of Atlanta seal and to the fact that this great American spirit has indeed risen from the ashes.

Our Victorian forbears could stride into Vinings distiller R.M. Rose’s namesake store at 79-81 Peachtree Street and choose from any number of ryes, but Prohibition ended all that. Temperance came to Georgia early (in 1908) and stayed late (through 1935), and until the craft distillery movement arrived here a couple of years ago, few spirits worth drinking were manufactured in this state. In the meantime, rye—the dry, nutty whiskey distilled by George Washington and preferred by most 19th-century tipplers—fell tragically out of vogue.

Enter ASW Distillery. University of Georgia alums Jim Chasteen and Charlie Thompson launched the operation in 2011 with a lightly aged whiskey they called American Spirit Whiskey. The partners outsourced distillation to Charleston, South Carolina, while they searched for a way to bring the business to Atlanta—and for someone who understood the finer points of rye making.

It was Chasteen’s youngest sibling, Joy, who introduced them to her high school classmate, Manglitz, another UGA alum who had, by this point, spent more than a decade fiddling with barley single malts, sorghum rums, and grape brandies. “We thought we knew a little bit until we decided to go bigger,” Chasteen admits. “Justin changed the world for us.”

The team finally secured a facility on Armour Drive in 2014, and Manglitz began designing the production space to suit his purist methods.

The two swan-necked copper stills allow him to control every step of the process by hand. He’s got valves for water, steam, and moving the spirit from vessel to vessel. And that’s it. “There’s no computer program buzzing and whizzing and telling us when to flip switches,” Chasteen says. “It’s just Justin on his little milk crate, smelling, tasting, timing, and watching proof.”

“I’m not taking the shortcuts that human beings have developed in the last hundred years to make it more efficient, to make it scalable, to make more money from it,” Manglitz says as he peeks in on a foaming batch of Resurgens. “I’m doing it the old way.”

So how does Resurgens taste? It’s redolent of chocolate, with hints of buttery graham crackers and hazelnuts. Above all else, it’s peppery, a quality that Manglitz prizes. “You can add some peppercorns to your Manhattan, or you can just use this rye.”

House spirits
ASW Distillery makes more than rye. Here’s what else you can sip during a tour. Fiddler Bourbon
“Foraged bourbon.” ASW hunts for bourbon—both new and aged—from other makers, then blends or finishes  them in its own barrels. 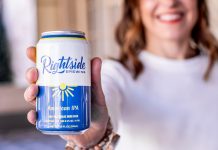 With Rightside Brewing, Emree Woods set out to make a “satisfying” nonalcoholic beer