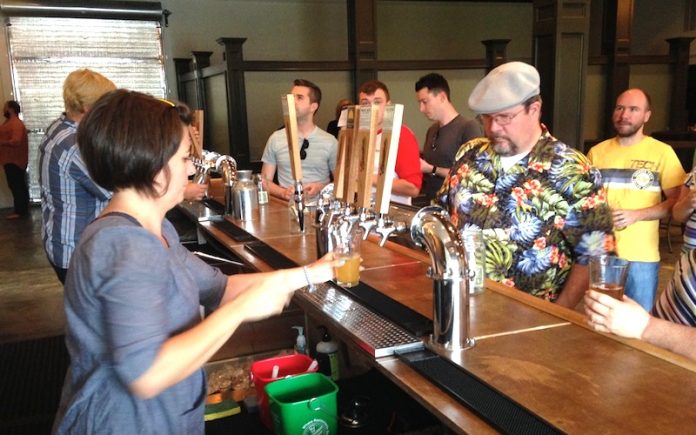 When it comes to the beer culture surrounding the city’s taprooms, Atlanta’s brewing community is still in its infancy. The recent implementation on July 1 of new taproom regulations is an important step that will lead to many breweries being open to the public for more hours each week, but the degree to which they’ve been restricted up to this point has in turn created a somewhat homogenized landscape. Why sink a huge amount of money into a taproom when it’s only economically reasonable to open it a few days per week?

That’s one of the reasons why the just-opened taproom of Eventide Brewing immediately stands out as something a bit different. Located in a residential neighborhood in the heart of Grant Park/Peoplestown, the setting is wholly unique for the city, as is the vibe. Though it’s been open only two weeks, it’s filled with a diverse cast of characters on a Friday afternoon: local neighborhood supporters, parents with throngs of kids and dogs in tow, and a smattering of curious beer geeks who have biked in from Midtown or Virginia-Highland.

Likewise, the brewers and ownership see their business as a concept apart from the prevailing trends in the Atlanta craft beer market. They sold their first batch of beer on Jan. 7, 2014 and have since sold a couple thousand barrels—mostly in Atlanta with locations in Savannah, Moultrie, Macon, Columbus and Statesboro. The lineup is deceptively simple, driven by approachable styles that depend on subtlety rather than anything qualifying as a “wow factor.” Kolsch. Pale ale. Irish dry stout. Hefeweizen. It sounds like the beer menu of a neighborhood brewpub in 1995. What do you mean, there’s no double IPA? Really? And that’s not an accident. To learn more, we sat down with Eventide co-founder and head of marketing Matthew Sweezey.

Now that the law has changed, how will that affect what you’re able to do in the taproom?

Well it actually changes a lot of things that people don’t even know about yet. Like food trucks, we’re allowed to have them on-site for the first time. The basic premise of being able to take alcohol home is the biggest thing. To be able to take up to 72 ounces home is a basic feature of brewery culture that we were missing. We have people who come in and buy a growler just to take it home after work. It’s a win-win for everybody; all it does is expand the relationship we’re able to have with fans.

What has the immediate reaction to the taproom been like?

Immediate reaction has been amazing. The first day of our soft opening we thought we’d maybe have 30 people here, and we had 170. The third day, we had more than 250. It’s been ridiculously successful from the start.

How important is having that taproom for on-site sales/profitability?

It’s a major boost to anyone’s bottom line. If we sell a keg, the number of hands it moves through before you finally buy a glass dramatically decreases the profitability. If you come in here and buy a tour and tasting on the other hand, the profitability is ridiculous compared to beer sold through distribution.

In the beginning, what was your biggest hurdle in getting that first beer out?

It’s hurdles, not hurdle. Everything is a hurdle—getting your financing, getting your building, getting it up to code, building your brewhouse, working out all the kinks. The biggest problem is just building your brewhouse because you have to determine, are you going to contract someone or build it all yourself? With the complications that come with beer, any mistake can completely screw up everything.

I remember when I was last here we talked about just how DIY everything in your brewhouse is—moreso even than most craft breweries.

We built everything in this place except for the giant tanks. We cut and bent our own pipes, welded them, built our own grain mill, ran our own water and gas lines, built our own water filtration system—an engineering magazine even wrote us up for our glycol system because we’re the first brewery in the United States to use that specific type. We’re different because you’ve got myself, a 4th generation woodworker, and our CEO Nathan, a 4th generation engineer. Even the electronic control systems, Nathan hand-built them all, bought the pieces and components and soldered them together.

It seems like, with the taproom fully renovated, you’re going more for “neighborhood hangout” than beer geek destination.

Oh yeah, we’re not a beer geek destination. The beer geeks will already probably come to check out the new place, but if you’re coming from out of town and want to try the most insane thing, this is not a place on your list. We’re one of the very few breweries that are located in a neighborhood, and they’re extremely supportive of us. Those were the people donating to our Kickstarter campaign. We asked for $30,000 and ended up raising more than $36,000.

Our whole mentality has always been “great doesn’t have to be complicated,” and I think that fits very well with this neighborhood as an easy place to come and enjoy. I mean, you’ll see kids here all the time. In fact, the only negative review we have so far was from someone who didn’t like seeing the kids here.

You said “great doesn’t have to be complicated.” That’s also sort of your brewing philosophy, if I’m not mistaken.

Exactly. You get asked a thousand times, “With so many breweries opening up, how are you going to be different?” And the way most people try to answer that is by saying “We’re going to be the most extreme.”

“We’ll do things no one has ever done before.”

Right, and we’re not saying experimentation is bad. Experimentation creates great things, but that’s not what our focus is. If we look at the majority of the beers we drink, it is not extreme beer. We always return to things that are more approachable and less overpowering. And we believe that once you go and experience the most extreme things in the beer market, you realize how powerful subtlety can be and why some things that are so subtle can be so good.

Has the kolsch become the flagship beer?

I think in the Georgia market it’s done commercially the best for us. Pale ale also does good, and the stout is my favorite in terms of capturing the style, but the pale ale and kolsch will be the first in cans [by fall or the end of the year].

What do you see as the main value of having, say, one account in a small town or city?

Well, when we opened we didn’t launch with the fanfare of a brewery like say, Creature Comforts in Athens where they sell out the moment they touch the market. Now we’re at the point where we just have to maintain our accounts because every week we get sold out, which is a good problem. Not to mention, who doesn’t want to see your beer on tap at your hometown bar?