Home Drinks Atlanta’s newest craft beer brewers bring Wild Heaven to earth
While the makers of Wild Heaven Craft Beers officially introduced Atlantans to their inaugural brands Tuesday night at Brick Store Pub in Decatur, the city’s foodies had an advance sip early this summer.
Wild Heaven’s Nick Purdy and brewmaster Eric Johnson happily tapped into the media launch party for the Atlanta Food & Wine Festival announcement party back in June.
It didn’t hurt that Wild Heaven was one of the only beverages available in the scorching West Midtown space that night either.
“It was the perfect event for us since there were so many of Atlanta’s best chefs there,” Purdy tells Dish. “Atlanta has become so chef-driven and at the same time, the city has become very sophisticated about food and that’s carrying over into craft beers.”
Restaurant Eugene chef Linton Hopkins has already sampled Wild Heaven’s Invocation Belgian-style Golden Ale and its Ode to Mercy Imperial Brown Ale.
South City Kitchen has inquired about hosting a beer dinner.
Brick Store Pub, The Corner Pub, Leon’s Full Service, The Marlay House, Twain’s Billiards and Thinking Man Tavern in Decatur are already pouring the product. Cypress Street Pint & Plate in Midtown, Midway Pub in East Atlanta and Taco Mac in Dunwoody are among the other local establishments on board.
For now, Johnson’s recipes are being brewed in South Carolina with plans to move the brewing operation to Decatur by 2013.
“We’ve got four local breweries here for craft beer yet we’re one of the top markets,” Purdy explains. “Obviously, the interest is here. We just don’t have the breweries yet. We’re hoping to help change that.”
Johnson will also be serving up plenty of the product at Trappeze Pub in Athens where he works. Craft beer connoisseurs will note an Athens nod in Ode to Mercy.
Sophisticated suds samplers will detect a hint of Athens’ own 1000 Faces coffee in the finish of Ode to Mercy’s creamy deep roasted malts.
Fittingly, the name of the company, Wild Heaven, was inspired by the R.E.M. song “Near Wild Heaven” from the Athens-birthed band’s 1991 “Out of Time” album.
For more info, visit Wild Heaven’s official website.
Advertisement 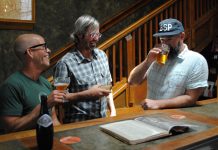 The Brick Store Pub: 20 years and lots of beer 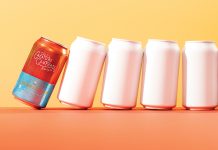 Why you can’t find a six-pack of Tropicália anywhere