Home Drinks Barley + Rye: You should drink cocktails at the Wrecking Bar Brewpub

Up until pretty recently, The Wrecking Bar Brewpub did not make my mental checklist of Atlanta’s expanding craft cocktail scene. If you’re like me, then we’ve been collectively missing out. While a weekly rotating list of beers still takes center stage (love that smoky Son of a Beech Rauchbier), the seasonal cocktail menu holds its own court. If you’re like me, then you’ll have to request the menu, but once in hand, you’ll be glad you did.

I sat down with Ian Cox, the pub’s server-turned-bartender-turned-beverage director who recently placed third at the United States Bartenders Guild National Championship in Las Vegas. He made his competing cocktail, which is now available: The smooth but fiery Red Sun Rising, with a coriander and sesame-infused vodka, red bell pepper, coffee, and lime. Last year Cox won the USBG Beefeater 24 competition and repped the US in the Prague global finals where he placed tenth.

I know you’re a champ, but I don’t normally mess with vodka. I’m not a big vodka guy. I’m more into whiskey and gin. But I got the email that said, “Your spirit for this competition is American Harvest Vodka.” That was that.

What do you like about competing? I’m a competitive SOB. I played football all through college—two years at the Air Force Academy and two years at UNC Chapel Hill. I started bartending right out of college. Since I manage now, I don’t get to bartend all that much. So this is my way to get my competitive juices out and actually be creative.

And hang out with bartenders from all over? It’s like a wrestling match, so you’re standing around a lot, waiting for your seven minutes to get up there and make four drinks. You get to meet a ton of people. And it’s a great way to get your name out there and promote your brand. I always represent the Wrecking Bar, but I competed as United States Bartenders Guild-Atlanta. I’m the vice president.

Tell me more about your work with the chapter. I’ve been a member for a year and a half, on the board for three months. It’s really good for education. We get together once a month, chat, have drinks, and we learn about spirits. Our reps come in and teach us about their brands. It’s nice for camaraderie, too.

Mostly craft cocktail types? We get a really wide range, and we still talk beer, but it’s mostly cocktail people. I mean I’m there—and the Wrecking Bar is not really thought of as a cocktail bar, people think of us as a beer bar.

Guilty. Talk about how you put together your menu. I mess around behind the bar. I talk to Chef [Terry Korval]. I made the Red Sun Rising about ten different ways and I’m always asking his opinion on flavor profiles—is it balanced, do you taste this, do you get that. When I create a drink it’s one of two ways. I start with a classic, whether it’s a Manhattan or a Sazerac, or whatever. Then I get rid of one ingredient and replace it with something else. It’s a little plug-and-play. The other way is a guest says, “I like this liquor and I like this flavor—make me something.”

For example? The first drink I ever created is called School Girl Crush. The woman said, “I like citrus and I like vodka.”

Again with the vodka. I was like, well I can make you a Cosmo—

Did you really? I love a well-made Cosmo. But I asked her if I could do something else, so I ended up with a spin-off.

What other drinks have you brought to competition? For the national championship I won with Beefeater 24, I made the Changing of the Garden: Beefeater 24 gin, green chartreuse, St. Germain, hopped grapefruit bitters, and a New Zealand sauvignon blanc. I’ve also won with a rye whiskey drink called the Rye and the Dark—it has Fernet Branca, vinegar, and a blackberry mint syrup.

Any booze news at the pub? We’re going to have two versions of a barrel-aged Negroni on for Negroni Cocktail Week in June. A dollar of every Negroni sold will go to a local charity, so we’re going to donate to The Giving Kitchen. One will be a straight Negroni, for the other we’ll play with Campari and Cynar.

You’re a fan of the earthy notes. Yeah, I’m known for doing big and boozy drinks that are well-balanced.

Yes, this Red Sun Rising is packing quite the punch. People say my drinks are dangerous! That probably comes from working at a college bar for years. 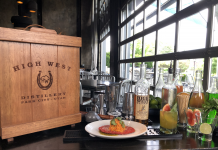 A Taste of High West on Atlanta’s BeltLine