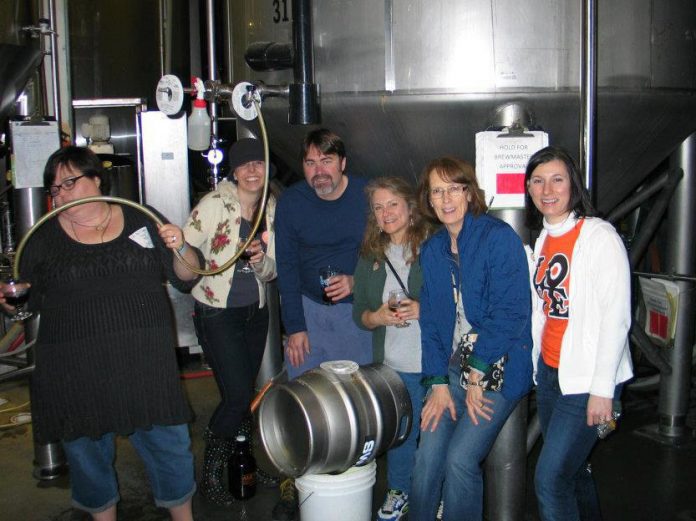 The Georgia Ale and Lager Sirens (GALS), an education and advocacy group for women interested in craft beer, are bringing the breasts to Atlanta Beer Week. Founders Jennifer O’Connell and Kimberly Charles will host Bosom Buds at 5 Seasons Westside, a bachelor-style live auction benefitting the Georgia Breast Cancer Coalition Fund. The event will feature DJ Rich Sullivan (formerly of Dave FM) as auctioneer and performances by Syrens of the South.

Atlanta Beer Week started last weekend and continues through October 27. To build business and celebrate a love for beer, local breweries, pubs, and restaurants are tapping new kegs and hosting tastings and crawls of all kinds. I spoke with O’Connell about the hop-inspired fundraiser and the GALS mission of bringing more women into the craft beer fold.

So, the Georgia Ale and Lager Sirens. Really? We came up with the name over a few beers. Kimberly and I met at a BeerAdvocate.com event hosted at Brick Store Pub. We were two of four women at this event. We kept running into each other and started to hang out—our husbands started to homebrew together. We were sure there were more women out there who liked craft beer and wanted to hang.

Your website states you’re infiltrating “the sausage fest of beer.” How’s that coming? Okay, you’d go up to a table at an event to taste and they’d automatically reach for the lightest beer they had. Not everyone, but a good number of people. I’m a woman, so I must want that sweet, light thing. That’s not happening like it used to. Give me hops! Give me a stout! At Hotoberfest, it seemed like the number of women attending maybe tripled. And these aren’t women who are there to keep their man entertained. It’s amazing the diversity you’re finding in beer now, with younger women especially, who aren’t just having a pink cocktail or wine.

What happens at these GALS gatherings? We try to keep it pretty educational. So we’ll ask a bar to pick a favorite account and we’ll ask that brewery rep to talk to us about their beer. In June we did a tasting with Sierra Nevada. We went to Mac McGee’s in Decatur, and they took apart the nitro faucet and broke down that whole process to us. Sometimes it’s just a tour of the brewery, like at the Wrecking Bar. Brick Store did a lesson on Trappist ales—learning what makes them a Trappist versus a Belgian Ale. We also enjoy volunteering and pouring beers at events. It helps with learning more about the beer.

Bosom Buds sounds like quite the soirée—you’ve got beer, burlesque—let’s talk prizes. We’ve got more than twenty breweries represented. And so many people wanted to participate who weren’t going to be able to make it that we had to incorporate a silent auction, too. Terrapin is offering tickets to one of their events and a private tour. The Twain’s prize is a tasting for four people, plus a private tour of their brewing facility. And many more. All the proceeds go towards the Georgia Breast Cancer Coalition Fund. It was very important to us that we donate the funds to a local organization.

Doors open at 7 p.m. Silent and live auctions go from 8 to 10 p.m. Free to attend and free to participate in auction.