Anyone who’s taken a brewery tour in Atlanta knows that some of the city’s most popular beers started out on home brew kits. This Saturday, July 18 at Red Brick Brewing, the Great Southern Craft Beer Competition finalist party offers attendees the chance to support up-and-coming talent by voting for their favorite home brew, by finalists Zachary Owen and Alan Pugh. The winning brewer will receive a grand prize of $1,000 and distribution at Midtown’s Publik Draft House, producer of the competition, for a year.

The two home brewers had their beers selected from a pool of more than 30 entries earlier this year, according to Publik Draft House owner Eddie Johnson. The judge panel included Atlanta beer writer Ale Sharpton, blogger Jessica Miller, and Tyler Cates, Red Brick’s marketing coordinator. Owen, a seven-year amateur home brewer, submitted a Scottish Ale, and Pugh, who volunteers at Burnt Hickory Brewery, sent in his White Queen Russian Enlightened Stout. As with the first round of judging, the final taste test at Red Brick will be blind.

In some ways, the competition is still establishing its reach—of the 30-plus entries, most came from the Atlanta area, with samples also shipping from North Carolina and Florida, Johnson said. Quantity can be a good thing, but perhaps building interest and enthusiasm at home is more important. Last year’s winner, Taylor Bareford, gained local fans and impressed judges (note: I was one of them) with his Chocolate Chili Stout. The competition is about exposing new talent.

Saturday’s event costs $12 per person at the door, and will include samples of both finalists’ beer, which is being brewed by Red Brick for the party; tastings of the brewery’s own beer, food pairings from Publik Draft House, and live music. 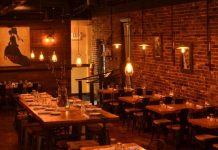