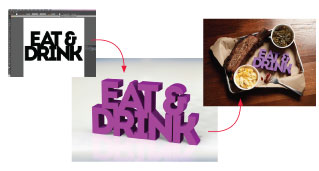 The lettering on this month’s cover and throughout our annual Best of Atlanta package was brought to you courtesy of additive manufacturing, otherwise known as 3-D printing. If you’re like me, you’ve heard about this process but never really understood it. Maybe it’s the word printing, which implies paper. But 3-D printing is done with plastic—and in this case, with an eco-friendly plastic made from corn. It’s called polylactic acid, and unlike petroleum-based plastics that stick around for a bazillion years, these plastics actually can break down into harmless compounds. Which is just one of the aspects of 3-D printing that is kind of blowing my mind right now.

My education on this technology came from Garrett Sisk, founder of Marion Systems, an Atlanta company that builds 3-D printers and produced the letters for us. This is how it worked: Liz Noftle, our design director, chose the font and sent Garrett the layout. Using SolidWorks, a software that employs three dimensions, he gave the words depth. That design became the operating instructions for the printer, which builds objects in thin layers. An extruder pushed the plastic through a heated nozzle, setting down layer upon layer. Imagine a really high-tech glue gun. It’s not quick; each model Garrett printed for us took between seven and nine hours.

The result was something unique and very cool. (After we photographed the words for the issue, I noticed them appearing on staffers’ desks as one-of-a-kind paperweights.) But the technology is much more than a novelty. Additive manufacturing allows inventors and designers to make prototypes far faster—and far cheaper—than traditional manufacturing, which involves working with machine shops or injection molding companies. 3-D printing, Garrett told me, “allows engineers to verify their designs.” If something’s off, just print out a revised model.

But the best applications of 3-D technology are things I’d never imagined. One of Garrett’s clients wants to use 3-D prints to manufacture grips for children with hand disabilities so they can do something as simple as ride a tricycle. 3-D printing is what they call a disruptive technology, because it will change the model we have for making stuff—all kinds of stuff. I welcome the disruption.

This article originally appeared in our December 2013 issue