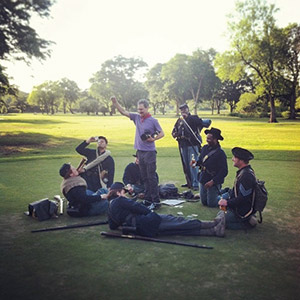 I’ve lived in the South for fourteen years—most of my adult life, it turns out—but because I wasn’t born here, or even raised here, I will never be considered of the South. My children will, however, and as they grow older I am curious to see how their consciousness and their identity are shaped by the legacy of this place. The joke (okay, the sad truth) about Atlanta is that there is no part of our history we won’t bulldoze over, but all the cranes and concrete and construction can never totally obscure the psychic fallout of what happened here 150 years ago, when the Battle of Atlanta presaged the end of the Confederacy.

And so we live on haunted ground. This realization became especially palpable to me after looking at Gregg Segal’s portraits of Civil War re-enactors photographed around the city, in places where pivotal skirmishes had taken place during that hot summer of 1864. The juxtaposition—history brought to life against a stark and contemporary backdrop—is at once funny and jarring. Our cover model is Sean Murray, who during the shoot donned both Union and Confederate uniforms. Murray’s own story is very much an Atlanta one: Born in Connecticut, he first became a Union re-enactor in Delaware, then switched sides when he went to college in Virginia, where he met his Southern-born wife. The couple now live in Roswell, where they work as wedding photographers. During weekend re-enactments, Murray will subsist on the rations that soldiers did back then: hardtack, salted pork, beef jerky, maybe an ear of corn or an apple. For Murray, his twenty years as a re-enactor have given him not just an appreciation of the awfulness of the war, but the causes for which both sides fought. Or at least some of them. Over time, Murray’s belief in states’ rights swayed his sympathies more toward the South, the issue of slavery being a glaring exception.

Segal’s photo essay is just one component in an issue devoted to the battle, to the war itself, and to a complicated legacy that defines our city still—sometimes in good ways, sometimes bad, but always there. As real as the ground beneath our feet.