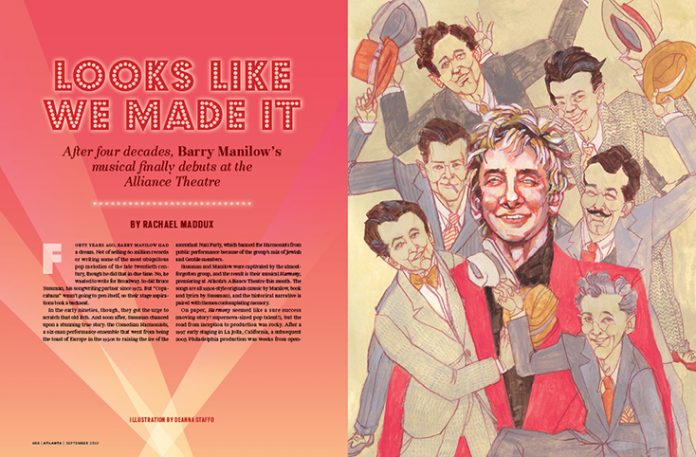 Forty years ago, Barry Manilow had a dream. Not of selling 80 million records or writing some of the most ubiquitous pop melodies of the late twentieth century, though he did that in due time. No, he wanted to write for Broadway. So did Bruce Sussman, his songwriting partner since 1972. But “Copacabana” wasn’t going to pen itself, so their stage aspirations took a backseat.

In the early nineties, though, they got the urge to scratch that old itch. And soon after, Sussman chanced upon a stunning true story: the Comedian Harmonists, a six-man performance ensemble that went from being the toast of Europe in the 1930s to raising the ire of the ascendant Nazi Party, which banned the Harmonists from public performance because of the group’s mix of Jewish and Gentile members.

Sussman and Manilow were captivated by the almost-forgotten group, and the result is their musical Harmony, premiering at Atlanta’s Alliance Theatre this month. The songs are all 1930s-style originals (music by Manilow, book and lyrics by Sussman), and the historical narrative is paired with themes contemplating memory.

On paper, Harmony seemed like a sure success (moving story! supernova-sized pop talent!), but the road from inception to production was rocky. After a 1997 early staging in La Jolla, California, a subsequent 2003 Philadelphia production was weeks from opening when its producer fell short on cash, axing the run. While the rights were in limbo, Manilow, now seventy, sued the producer and landed in the hospital with stress-related heart problems. “Barry and I said, ‘Well, this hurts too much,’” Sussman remembers. “We just decided we were going to let [the show] sit there, and when it was right, it would be right.”

Last year, it finally seemed right. “I decided that, before I croak, I just want to see it up one more time,” Manilow says. “I called up Bruce and said, ‘Why don’t we go back to where we were the happiest?’ Which was a regional theater.”

The Alliance—which premiered Elton John and Tim Rice’s Aida in 1998; launched John Mellencamp, Stephen King, and T Bone Burnett’s Ghost Brothers of Darkland County last summer; and boasts a regional Tony award, among many other accolades—seemed to be a natural fit. “I’m very proud of the Alliance Theatre’s role as a safe, supportive home for new work, in particular new American musicals, because it requires a kind of flexibility, a kind of protective and supportive environment that we’ve worked really hard to build,” says Susan V. Booth, the Alliance’s artistic director. “What’s interesting about this production is—I mean, it’s not like Bruce Sussman and Barry Manilow don’t have pretty demanding day jobs. It would be so easy for them to put their hands up and say, ‘Okay, we’ve got a great director, we’ve got a great theater, go do our show.’ They’ve done the absolute opposite. They’ve leaned into this particular moment and said, ‘We love this director. We think he’s crazy smart and gets our show, so let’s lean into it like it’s brand new and make sure it’s exactly right.’ They didn’t have to do that.”

That director is Tony Speciale, a relative newcomer who worked with the writers to refine the show, holding production meetings in New York all spring before decamping to Atlanta in late July. “This piece is remarkable, and it reminds me of how many stories there are out there like this that none of us have heard of,” Speciale says. “The Nazi Party was very effective at eradicating stories like this. And so it’s always miraculous when something like this survives, and no one knows about these people, and you get to be part of the process to shepherd their story to the stage.”

Because the show lay dormant for so long and will so differ from its one previous production, Harmony’s run at the Alliance—from September 6 to October 6, 2013—is being hailed as its debut. In March, it moves out in Los Angeles. And after that? Sussman and Manilow are just trying to take it one curtain call at a time, but they may make it to Broadway yet.

How did you find this story?
Sussman: I was having my coffee over the New York Times, and there was a review of a documentary playing downtown, Eberhard Fechner’s epic documentary Comedian Harmonists at the Public. I went and watched four hours of German documentary-making with subtitles—not my usual cup of tea—and was totally overwhelmed. I went out into the street and there was a pay phone, and I called Barry in Los Angeles and I was blathering. He said, as he is wont to do, “I don’t know what you’re talking about, but go get it.” A few months later I was in Germany doing the research.

Manilow: The Comedian Harmonists were the biggest group in Germany and around the world, doing what they did. They were a combination of the Marx Brothers and Manhattan Transfer—very sophisticated harmonies and very complicated singing. Bruce and I had never heard of them. And in the world of music, we know everybody. How could they be so hugely popular and we had never heard of them? Why we didn’t know who they were turned out to be the story.

Sussman: Five of the six men were gone when we started working. The lead of our play—Roman Cycowski, nicknamed “Rabbi” because he was in rabbinical school when he joined the group—was alive, but we didn’t know where he was. And then, lo and behold, we found out that he was living in Palm Springs. Barry also lives in Palm Springs. As it turned out, he was living literally within spitting distance of Barry’s home. You would not be out of breath, taking this walk from where Barry was composing the score about this man’s life. Barry met him and presented him with an award from the Grammy academy. He died in 1998 at 97 years old. His wife, Mary, the female lead in our play, was six years his junior and lived seven years longer.

The show is all original songs, but how much did you pull from the 1930s, sound-wise?
Manilow: When the Comedian Harmonists were banned from performing, everything was destroyed—but somehow about twenty songs did survive. I studied those before I put any notes down. It took me about a year before I did anything. I was soaking in this style of music before I felt confident enough to write the score that sounded like it was real and appropriate for the show. But I think both Bruce and I actually nailed it. When people hear the score, they don’t think that it would have come from Barry Manilow’s pen—in a complimentary way. It’s so far away from any record I’ve ever made, anything I’ve ever performed or written. I’m real proud of it. It was a real, deep learning experience for me.

What made Tony Speciale the right director?
Sussman: When we put word out that we were doing the show again, we got all these directors who were interested in meeting with us, including deeply resumed Tony Award–winning directors. Every single one of them could have done it, but there was something missing. And we wanted to kick it in the butt. We wanted to push it one level higher, something more blazingly theatrical than we had ever done before.

Tony’s name came up. Friends sent over photos of a highly acclaimed A Midsummer Night’s Dream that he did last summer in New York. Barry and I had never seen anything like it. We met with him, and he blew our socks off. He came in with such a fresh imagination, and he brought up what he thought this piece could be by way of memory and how it could unfold visually. He left the room and Barry and I looked at each other and said, “That’s the one.”

Manilow: His resume doesn’t compete with any of the other great directors that we met. But we believe that Tony is going to give us a version of Harmony that even Bruce and I couldn’t have imagined. There are some things he’s doing that are just crazy and brilliant. I think we chose right.

What about the cast?
Manilow: The Comedian Harmonists were the Backstreet Boys of Germany. They were young, in their twenties. In the earlier productions, we hired wonderful actors and singers, but they were in their thirties. This time we’re going for young. The male leads sang sixteen bars of the finale during one of the callbacks, and the sound of young boys singing the score, as opposed to more matured voices, just knocked us out.

And it makes it that much more poignant, knowing what happens to them.
Sussman: That, too. A challenge of this show is that, as an audience, we know what happened—not specifically to the members of the group, but we know what happened in the world they were living in. It’s very hard to crawl back into a state of innocence where you don’t know what’s waiting ahead of you.

After twenty years, with the show finally coming together, how are you feeling?
Manilow: We’re ignoring it right now. We’ve been down a pretty rough road, and we’re just doing our job. Once I see that curtain go up is when I’ll get excited.