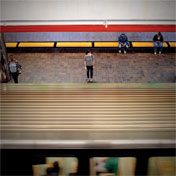 When a subway train first begins to whine and shimmy as it pulls away from a station, for an instant everything inside is suspended. The g-forces have just begun to exert their will on the bodies inside the train cars, but the bodies haven’t yet had a chance to respond. Sometimes they don’t respond, or they do but not quite in time, and the untethered riders are suddenly struggling to catch themselves as they fall, grasping at seat backs or whatever or whoever else happens to be within flailing radius. More than once on MARTA I’ve seen a half dozen passengers, caught unprepared, topple like stunned dominoes.

The most frequent victims of this taffy-like gravity are the casual riders: the tourists, the school groups, the rowdy packs of Braves fans slouching toward Turner Field to be beered. They’re unsure of which stop is theirs, let alone the precise angle and pressure at which they need to plant their feet in advance of sudden forward motion. From personal experience I can attest that it takes awhile to grow accustomed to MARTA’s rhythms, to internalize the microscopic choreography required to stay upright on a moving train. So I shouldn’t judge, I know. But this is part of MARTA’s rhythm, too. Riding the train, over a period of time, exacts a kind of garbled empathy: part annoyance, part awe at the willingness and the occasional inability of thousands of strangers to cram themselves alongside other strangers in grimy, stuffy metal cartons that rumble under and over and all through the city at alternately great and glacial speeds.

I became a dailyish MARTA rider two Februarys ago when I took a job at an office a stone’s throw from Peachtree Center. The cost of a parking garage pass was exorbitant, and I didn’t fancy the prospect of battling traffic to and from my place in Decatur every day; plus, I figured taking the train would at least somewhat tamp down my chronic yet aimless carbon-emissions guilt. It was a logical choice—but, as with a lot of logical choices, I wasn’t exactly pumped about following through. I’d taken MARTA enough on weekends to develop the standard gripes about Atlanta’s transit system: that it was little more than a passel of dumpy, grimy trains carrying unpredictable passengers to inconvenient stations on erratic schedules. And the complaints of every weekday rider I knew made me wonder if the phrase “MARTA horror story” was somewhat redundant.

So it surprised me, as I contemplated my two-year MARTAversary a few months back, to realize that what I now value most about my commute—what I maybe even love—is the humanity of it all. And I don’t just mean people-watching, although that’s generally primo (especially around Dragon­Con, when it gets meta: watching all the people people-watching). I’ve come to understand some of the strange intimacy involved in taking the train, and it’s a weird, kind of beautiful thing. It’s the opposite of driving a car, where everyone on the road sees each other not as humans, but as a mass of steel-and-chrome cocoons, machines vulnerable to other machines. On MARTA you’re vulnerable to machines, too—though admittedly distant, there’s always the chance that brakes could fail, that trains could crash—but there’s an undeniable sticky, squishy human element. MARTA riders are immersed in one another. Sometimes this too literally involves close contact with strangers’ body fluids (I once watched a little girl barf into her mother’s outstretched hands, and more than once I’ve seen a gentleman relieve himself against a station wall), but mostly it’s emotional, maybe even existential.

MARTA is a transitional state for us. We riders are caught between where we came from and where we’re going; we are not each other’s target audience, we are not trying to impress each other, we are mostly trying to ignore one another. But despite this we are witnesses to each other’s lives—lives often at their most unguarded, tired, limpid—whether for five minutes between stations one afternoon or for days and weeks and years at a time. Among my fellow daily transit-takers, I’ve beheld a perpetual evolution in hairstyles, personal technology, reading habits (last summer’s shift from The Girl with the Dragon Tattoo to Fifty Shades of Grey was breathtaking). I’ve watched squalling babies, toted along by their briefcase-balancing mothers, grow into talking, giggling, pointing toddlers; I’ve noted the sudden absence of once-regular elderly riders whom I’ve never seen again.

As it happens, MARTA is in a transitional state of its own right now. In 2012 most rail systems in similarly sized U.S. cities saw a spike in ridership; meanwhile, in Atlanta, MARTA ridership was down by 8 percent (and that’s a trend—since 2001 it’s down 15 percent). Last summer’s defeat of T-SPLOST, which had promised MARTA a $600 million influx of much-needed cash, compounded long-existent budget woes. Early 2013 brought a new MARTA CEO, reorganized leadership, and continued dalliances in privatization, so something seems likely to happen soon. Whatever it is, I hope it helps position MARTA as a vital element of this city, rather than reduce it to a niche concern (its best bad reputation) or sideline it as an inefficient cesspool (its worst).

The longer MARTA is part of my day-to-day life, the more I’m convinced that taking the train is the best way to understand this strange, sprawling Atlanta of ours. Even though we rarely exchange even the most basic pleasantries, I feel more connected to the people I share this city and these train cars with—both those who choose to ride, like me, and those for whom MARTA is the only means of getting from point A to point B. I’m more in tune with Atlanta’s seasonal rhythms, its festivals, its tournaments, its conferences that clog the platforms with rolling suitcases and wide-eyed out-of-towners. And there are views of Atlanta that only MARTA affords; my favorite is the DOSE-graffiti-tagged backside of the Coca-Cola sign looking out over I-75, eye-level with the blue and green line between Georgia State and King Memorial. “There’s my city,” I think every time we trundle past.

Some days, smug as it sounds, I feel like taking MARTA has made me a better person—not that it makes me better than anyone else, but that it has made me better than myself. Other days remind me that I’m about as good at riding the train as I am at being a human being, and in both cases I still have many lessons to learn.

One afternoon in April, the train packed with NCAA tournament revelers, I couldn’t quite get my footing before the train lurched away from the North Avenue platform and suddenly found myself suspended in one of those slo-mo free falls at which I usually shake my head. I grasped the metal handrail like a desperate monkey, but my body pivoted out of my control, teetering precariously over the passengers sitting behind me. Just before I fell, I felt the warm pressure of a hand on my lower back—usually the last thing I want to feel on a crowded train—and was gently steadied, then slowly pushed back into a standing position, by a middle-aged man in a Braves cap. Whether he acted out of kindness or self-preservation, I wasn’t sure. And I wasn’t sure whether I was more embarrassed by the fact that I’d almost plopped myself into his lap or by the possibility that he or anyone might mistake me for an amateur rider. I spluttered some variety of ineffectual, self-deprecating thank-you, but the man just shook his head. The woman sitting next to him, whom I also would have squashed, thanked him; he smiled at her, and they shared a low chuckle. I looked away, blushing and still unsteady. And the train barreled on, oblivious to us all.