Home Uncategorized The Legacy of Deliverance

Forty years after its publication, Deliverance leaves most of us native Appalachian readers feeling—much like that quartet of luckless river voyagers—conflicted and sore. Its legacy of comedic shorthand spawned in the backwoods of northeast Georgia functions as a regional guilty pleasure. Most of us do not know whether to bow up at the story’s gamy iconography or wear the gag-gift T-shirt that reads “Paddle faster, I hear banjo music!” However, many of the toothless-sodomizer jokes I have cracked over the years taste brackish in my purty mouth now that I finally have read the book, which does not contain the “purty mouth” or “squeal like a pig” lines made famous in the movie’s harrowing man-on-man rape. I grew up just down a curvy road from where the story’s action takes place, but I shied away from the novel for years, leery of what I might discover about “my people,” and possibly myself.
Certainly, for home-folk, some passages prove excruciating to read, but the writing swept me like a current into an exalted awareness of the primeval and our part in it, reinforcing a perverse pride in our queer—or quarr, as old-timers say—otherness. Appalachian Studies majors usually sputter when their turf is described as “the country of nine-fingered people,” defined in one brutal stroke by sawmilling mishaps. However, poet James Dickey’s novel, which was published as the leaves changed colors in 1970, struck some notes of cultural and geographic chauvinism in me that are, like a twangy, claw-hammer mountain ballad, more complicated and less guileless than they sound at first. Could it be that I am that odd hillbilly who read Deliverance and felt . . . proud?
Its lessons on nature, rendered with such lyrical precision, have been overshadowed by the so-called “love scene.” Dickey wrote with a pupil-dilating rapture for wilderness, for wildness. The river is “blank and mindless with beauty . . . its icy pit of brightness, in its far-below sound and indifference, in its large coil and tiny points and flashes of the moon, in its long sinuous form, in its uncomprehending consequence . . . the more wonderful for being unbearable.” Just his description of feeling an owl’s talon through tent canvas is worth the price of the book, which could make a vegan dream of bow-hunting. Humans—the orthodontically challenged and ultimately the Atlanta bidniss-men—are just more feral players in this darkling landscape.
Lately, some critics have pronounced this “man vs. nature” theme dead, but its seeming decline in relevance is really a matter of mud-spattered supply and demand, with nature on the dwindling end of things. I am scanning the lumpy silhouette of the mountain behind my childhood home, where I used to poke around junked 1968 pickups rusting in the weeds, unearth old Mason jars half-full of moonshine, and look in vain for the legendary buzzard roost. Now it, like most of America, is a subdivision, “blank and mindless,” but not, as it turns out, with beauty. The rivers, too, have been “neutered,” as my outdoorsman friend Joe says, meaning dammed for electricity and exclusive, seasonal colonies of the lake house peerage. If you think those peckerwood psycho-rapists were clannish and hostile to outsiders, lug a cooler and a fishing pole around Lake Seed looking for recreational public access. The torrents of Tallulah Gorge, where parts of the movie were filmed, are timed with sluice gates for “aesthetic” releases—a show for tourists. A few wild stretches of rapids still exist here and there, but the shale-bed shoals increasingly conduct guided, inflatable rafts or neon-pink inner tubes that Lewis Medlock, the buff survivalist of Deliverance, would use for target practice with his bow and arrow. “Every ten feet, there’s a house, most of the time,” Joe says.
Atlanta, too, has changed. At the time, it was a preening boomtown dominated by ruddy, smooth-talking Southerners who were just a generation or so removed from dirt farming—men like James Dickey, a Buckhead native who was revered in literary circles for his exquisitely euphoric poetry but was better known around the city for obstreperous drinking and ass-grabbing (everyone who encountered him has a story). He had been a hotshot copywriter for Coca-Cola, and the book is narrated by the similarly employed Ed Gentry—think Mad Men in breathable seersucker. That “back to the land” theme hit much closer to home then than it does now, in the coffee shops of Kirkwood.
Fittingly, the book starts with Lewis observing, “We really ought to go up there before the real estate people get hold of it and make it over into one of their heavens.” Well, those “gray affable men” finally have taken over. And they always were more predatory than the mountaineers, who tend to depend on each other in the social compact—if, at times, truculently—in lieu of Realtors and stock dividends. For all of their resourcefulness, Appalachian people historically have lacked the resources to block the developers and the vintners and the retirees migrating here from New Jersey by way of Tampa.
Some of those settlers are my friends. I do not, as a cousin once did, greet them with a shotgun, and I am not suggesting that Bobby Trippe was “asking for it,” though the literary character—a disdainful and dull man—is noticeably less sympathetic than Ned Beatty’s portrayal on film. My senses, however, tell me that a certain amount of savagery remains essential to the ecosystem, that we need Tennyson’s “nature, red of tooth and claw” to keep our pulse from growing faint. I miss the haintlike skirl of the panther that used to stalk the mountain laurel behind my house. I always imagined this muscled cat in the moonlight with a shiver, similar to the exhilarating fear, the awe, that Dickey anatomizes.
“I had never lived sheerly on nerves before,” muses Ed Gentry, “and a gigantic steadiness took me over, a constant trembling of awareness in a hundred places that added up to a kind of equilibrium, that made my arms move in long steady motions and showed me where the rocks were by the differences in the swirling of the water.” That strange ecstasy of survival and endurance illuminates the nightshade of this story like foxfire. Deliverance, like the river that runs through it, is all the more “wonderful for being unbearable,” even if its players, with or without banjos, are now extinct.
Illustration by Lisel Ashlock
Advertisement 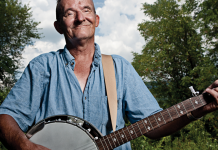