A purple dawn breaks across the Georgia National Fairgrounds in Perry, but Sheep/Swine Barn #1 has been bright and bustling for more than an hour. On the 36,300-square-foot concrete floor, covered in sawdust and dirt, hundreds of agriculture students from fourth grade up tend to their hogs. There are gilts (young females) and barrows (young males), some weighing in at more than 250 pounds. They’re squealing, eating, sleeping, or testing the cramped steel boundaries of 408 uniform pens.

The cells are blocked off by school. Participants have hauled trailers from the far corners of the state. This is the first of four days of the Georgia Junior National Livestock Show—the state championship for students who raise and show pigs, cattle, sheep, and goats instead of shooting free throws or kicking field goals. While football might be Georgia’s weekend religion, agriculture is its everyday way of life—a $74 billion industry, the state’s largest. These youths are continuing a tradition that predates the pigskin, reaching back to Georgia’s earliest English settlers. Judging livestock, the quality and quantity of food each animal will produce, has been a crucial skill since man first domesticated animals.

The spirit here is the same as at any Friday night football game, complete with interschool rivalries and, outside, rows of tailgating tents, soon to be stocked with wings and Crock-Pot barbecue. Back inside the barn, beneath the red, white, and blue banner of the Veterans High School Warhawks from nearby Kathleen, Georgia, sophomore Caroline Thompson mixes a thick meal of grain and plant protein with water and pours it for her two hungry gilts. Caroline cuts an unlikely figure as a farmer. Her long brown hair is down, the back of her jeans bedazzled, and her flowing black blouse seems inappropriately thin against the late-February chill. “I’m cold,” she says in a drawl. “But my outfit is cute.”

The 15-year-old daughter of a timber salesman and a phone company associate, Caroline dedicated her junior high years to the drops and dance routines of competitive cheerleading. But when Veterans ag teacher and Future Farmers of America adviser Clay Walker—taking note of her outgoing personality, her responsibility in the classroom, and her overall competitiveness—encouraged her to shift her focus to raising livestock, Caroline found something she’d been missing. “When I cheered, I never got much out of it,” she says. “Here I get the chance to take something to greatness.”

This year she hopes “greatness” is what’s milling around in the sawdust at her feet, digging its wet snout into her leg. Her parents helped her come up with the $450 apiece (plus another $1,500 for feed and fees) for the purebred Yorkshire Blue and the crossbred Belle as piglets from a breeder in Indiana. Over the past four months, she has built these animals from 50-pound weaners into 250-pound adults, steadily adding about two pounds per day before slowing the gain leading up to the show. There the swine will be judged on muscling, leanness, growth, and bone structure.

Today Caroline will also be judged. The showmanship competition takes into account how well the student can control and parade the beast before the judges. All that’s at stake for Caroline is pride and a trophy belt buckle. But a prize pig will be bought by breeders looking to refine the line. The rest will go to market to be butchered. “The better you do,” Caroline tells Blue as she brushes sawdust off of his back, “the better chance you have to live.”

Meanwhile in the adjacent Beef/Dairy Barn, fellow Warhawk Madison Smith and her father, Dallas Smith, are trying to calm a newly washed cow that’s been spooked by a blow dryer.

“Talk to her!” says an onlooker to the thrashing animal’s owner. “They know your voice. Calm her down!”

Madison, a junior, steadies the cow from the side, while her father, the lone adult in the vicinity, grips the lead. Eye to eye with a half ton of terrified beef, the project manager with no farming background whatsoever could fairly wonder how he got here. Like Caroline, Madison was intrigued by the Veterans ag program, and like Caroline, Madison started out on pigs. Last year she decided to step up to cattle, which require a yearlong commitment, not to mention more money—$2,250 per head, plus another $2,000 in feed and fees. In January she won senior championship showmanship at the Screven County 23rd Annual Moo Moo Classic, an achievement commemorated by a silver saucer-sized buckle on Madison’s belt.

Once the panicked cow is calmed, Madison and her father walk to her freshly cleaned and combed black Chi heifer, Crickett, who has been chewing hay and watching the action from her nearby stall. Crickett’s the jealous type. “She stares at me while I’m feeding my pigs,” says Madison.

Crickett has her owner’s full attention when the 11th graders are called. Madison leads her charge clomping out of the barn and over to the open-air practice ring, a staging area, where she signs in and is given a number. As they wait, Madison combs the heifer’s black coat, and Dallas picks out a few pieces of lint. Crickett starts licking Madison’s hand. “Stop!” says Madison in a whisper shout. “You’re going to make it slippery!”

Finally Madison’s heat is called. She lines Crickett up with about a dozen other cattle and their handlers, and they file into the show ring. The judge, usually a teacher or an exec from the ag industry, watches each handler for confidence, control, and consistency—keeping the animal at a distance, holding the head up, positioning the hind feet so that the back of the beast is level from neck to tail. Madison is poised, never losing eye contact with the judge. But Crickett can’t keep her feet set, so the judge eliminates them.

As they exit, an official hands Madison a green “Participation” ribbon, which she hands dismissively to her dad. She’ll take Crickett back to her stall, work on the footing, and try to otherwise prep the cow for her next showing in a couple of months.

It’s time for lunch. Out of earshot from Crickett, Madison quietly says she’s hungry for a hamburger.

Later in the afternoon, Caroline and the 10th-grade pig contestants are summoned to the swine show arena, essentially a rectangular high school bandbox with worn green turf. At the far end is a concession stand selling nachos and soda and hot dogs—“all-beef,” reads the menu.

At the judge’s signal, the students and pigs are released onto the turf in heats of 20 to 30. Unlike the orderly rank and file of the cow show, the hogs scatter irregularly in every direction, like a dumped bag of two dozen footballs. Armed only with a rod-like whip, the students must keep the animal’s profile between them and the roving judge and draw his attention in any positive way they can. Suddenly Caroline’s bejeweled jeans make sense, as other contestants’ metal-studded belts and shiny buckles and sequined shirts glisten beneath the fluorescents.

Gradually the judge picks his winners, sending them to a pen to await the next round. After about 10 minutes, Caroline and Blue are selected, earning a fist bump from Walker, looking on from the railing. He says his students are learning much more than how to parade a prize pig. “These kids understand where their food comes from.” The population keeps going up, he says, but the amount of land doesn’t. “These are the kids who’ll make sure we’re still fed.”

The second round follows quickly after Caroline’s preliminary heat. She gives Blue a quick spray of something called Pink Oil to shine him up and then a drink of water to reenergize him, but the pig is dragging, exhausted from the previous heat. He squeals from the floor, and Caroline has trouble keeping him focused. The judge picks the winners, and Caroline and Blue are left behind. Caroline shakes the judge’s hand and guides Blue back to the pen with Belle.

Neither of the gilts will attract a breeder. Both are bound for market. But there are no tearful goodbyes. Caroline is a farmer. “Yes, they’re my pets,” she says. “But when they go to slaughter, that’s part of it.” 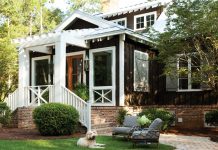 For bestselling author and designer James Farmer, it was finally time to build