Home Great Reads In the 1800s, a freed slave built bridges across the South. In...

The covered bridge trembles as a Lexus rolls through, past one beam charred by fire, past several others warped by a flood. The driver goes slowly, gingerly, through pale sunlight that rises from cracks in the floor and descends from bullet holes in the roof. Tires click and pop on the old pine. First came the covered wagons, then the Model T Fords, and now this white Lexus SUV on a clear Saturday morning driven by a woman who wants to see the bridge. They are 54.2 miles south of Atlanta, the woman and the bridge, with a rust-colored creek whispering beneath them and birds singing in the trees overhead. She might be 50. The Red Oak Creek Covered Bridge might be 175. It has stood here in Meriwether County for some 63,000 days, outlasting more than 30 presidents, surviving high water and shotgun blasts and pocketknives and carpenter bees and heat and cold and rain and snow and that August humidity that makes the air a stale bath.

The Lexus emerges from inside the bridge. “I feel sacrilegious just driving over it,” the woman says through her open window to no one in particular, and then she turns around and drives over it again.

The bridge’s longevity is nearly as astounding as the story of its builder, Horace King, part black, part white, part Catawba Indian, square jaw, flinty gaze—a man so far ahead of his time that he wore a soul patch 60 years before anyone heard of jazz.

King was born into slavery in South Carolina in 1807. He and his master, John Godwin, learned a sophisticated bridge-building technique called the Town Lattice-Truss, and King showed so much talent for the work that Godwin essentially made him a partner. The two men traveled around the antebellum South, helping expand its infrastructure to the west. They built a bridge across the Chattahoochee River that linked Columbus to Alabama, and when a flood washed it away, they got a contract to build it again. Godwin, under pressure to finish the job quickly, told King that if they met their deadline he would set him free.

They finished the bridge on time. And though it took an act of the Alabama legislature, Godwin kept his word. He died in 1859. King carried on without him, a free man behind enemy lines, building more than 100 bridges in what would soon become the Confederate States of America. He built a rolling mill for the Confederate Navy. It was a strange position, helping the slaveholders fight their war, and even stranger when the army of liberators began destroying his work.

One by one, King’s bridges fell. At the Battle of Moore’s Bridge in Carroll County in 1864, retreating Union soldiers set fire to a 480-foot span across the Chattahoochee. They went on to burn Atlanta. In this pre-telephone era, a week after General Lee’s surrender, Union cavalry made a needless raid on Fort Tyler at West Point. Twenty-six men died, and the Union burned King’s bridge.

King rebuilt the bridge in Carroll County after the war, but a flood swept it away in 1881. Five years later, a few years before King’s death, another flood destroyed his bridge in Wetumpka, Alabama. Wooden covered bridges went out of style, replaced by concrete and steel, and some fell apart from neglect. Officials from Callaway Gardens preserved a King bridge from Troup County that would have been put underwater by the West Point Dam. In Meriwether County in 1985, someone torched the bridge over White Oak Creek. Covered bridges in Georgia dwindled from more than 250 in the early 1900s to fewer than 20 today.

Now, of all the bridges that King built in Georgia, only one remains in use. And if Bruce O’Neal has his way, it will never fall.

The bridge keeper is 66 years old, a collector of arrowheads and Confederate swords, an amateur historian who gets paid to run Meriwether County’s Water & Sewerage Authority and volunteers as its director of public works. O’Neal has pictures of the bridge at sunrise and sunset, in winter and in fall, and twice a year he crawls around with a flashlight to make sure all the pegs are holding firm.

He checks on the bridge whenever he can. At night in the spring, he calls to the owls, and they call back. Sometimes he imagines Horace King, in his 30s and still a slave, building the bridge that connected farmers on the southern end of the county to the hulking gristmill on the Flint River. He wonders how the workers hauled lumber to the creek, where King bought his hammers and drills and saws. He thinks of mules pulling wagons across the bridge, the corn ground to meal on the water-driven wheel, the farmers reaching home before dark because the bridge saved them 15 hard miles. He imagines President Franklin Roosevelt going to bathe in the therapeutic waters of Warm Springs and then using this bridge as a shortcut to the river to catch a few smallmouth bass.

O’Neal remembers the cataclysmic flood of 1994, which killed 31 people, disinterred the remains of several Confederate soldiers, and swept away the Auchumpkee Creek Bridge near Thomaston. O’Neal paddled a 14-foot aluminum boat through the floodwaters and found the Red Oak Creek Bridge nearly submerged. Water had risen high above the floor, rushing through the interior, bending inward the wall on the north side. But the bridge stood. O’Neal drove a nail into the south wall to mark the water line and later affixed a small plaque at the same location to commemorate the flood: HIGH WATERMARK, JULY 7 1994.

Others love the bridge, too. They swim beneath it in the summertime and pose there for wedding and graduation pictures and eat Sunday lunches at nearby picnic tables. That’s fine with O’Neal, as long as they don’t mess with it, which some people do: a shotgun blast here, a board kicked out of place there. Devilment, he calls it. Some jackass put a chain around the historical marker and yanked it from the ground. O’Neal set the marker back up.

The graffiti that O’Neal has not removed tells an alternate story of the bridge, a people’s history in marker and spray paint. Mary Ann + Matthew obviously loved each other in 2003, but Andy + Amanda probably loved each other even more in 2010, given the repeated declarations on the eastern piling. The seniors of 2014 included Chandler and Lindsay. Someone had a thing for marijuana. CC + JD were best friends and planned to remain so forever. Chester was here. So was Steve H, apparently a real stud. Kim loved Brian. Jason loved Tiffiny. Mick loved Tammy. Someone implored us to save the whales.

O’Neal lives less than a mile from the bridge, and he watches day and night for this sort of devilment. Recently he posted a sign that said NO GRAFFITI $1,000 FINE. When someone threw it in the creek, O’Neal made another one and put it up too high for the vandals to reach.

From Atlanta, you can reach the bridge by going south on Georgia State Route 85 through Fayetteville and Senoia down to Imlac, where you turn left on Covered Bridge Road. A sign says PAVEMENT ENDS, and another says ONE LANE ROAD and NO THRU TRUCKS. A green metal frame straddles the road, the doorway O’Neal put in to filter out vehicles like the boom truck that came through last year and splintered beams in the bridge’s roof.

An hour before sunset, the air is sweet with honeysuckle and whining with mosquitoes. On the far side of the bridge, shadow engulfs the lower foliage while the treetops still glow fluorescent green. An old truck rolls through the bridge, headed east toward the river. The timbers shudder faintly. The truck stops, and the window rolls down. The driver is Bruce O’Neal. He says hello, but he can’t stay long. He has to go demolish some beaver dams with a mallet and a chainsaw.

The creek rolls under the bridge with the sound of an open faucet. Honeybees guard the queen who has taken up residence inside the northern wall. A woman and a man emerge from the woods and walk toward a silver Buick LeSabre. He is talking on a cell phone, offering someone an unsanctioned ride.

They get in the car and it pops and crunches along the bridge and then turns around and crosses again and they disappear to the west amid a rising trill of crickets. A dragonfly lurches above the creek like a small plane with engine trouble. A truck crosses the bridge, red cooler in the bed next to a fishing pole, followed by another truck, a Ford Super Duty F-350 containing a man and two women and at least two dogs. The man has a floppy-haired little dog wedged in the crook of his arm by the open window, so that for a moment the dog appears to be driving the truck. The big truck turns and goes back through, a load of 7,000 pounds, and the timbers hold. O’Neal believes the resin hardens with age, and he thinks the timbers could last another hundred years.

The sky goes pale, with red seeping in from the west. The creek rolls south toward the Gulf of Mexico. High in a tree, a bird makes a strange and plaintive sound. The old bridge stands in the fading light. 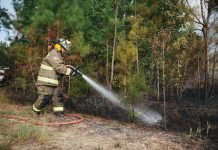 One Square Mile: The volunteer firefighters of Meriwether County