Late in the spring, after the foreclosure, the Peachtree Pine homeless shelter Downtown was itself in danger of homelessness. Inside the brick walls, where 574 men sleep on an average night, the leaders prepared for a siege. They believed that the city’s most powerful forces were allied against them. Some of the leaders lived in the shelter. They had nowhere else to go. On a gray Tuesday morning, about twenty of these resident volunteers gathered in a second-floor conference room with their executive director, Anita Beaty, age sixty-eight, also known as Mama.

She cleared her throat.

Mama You may have noticed that we’ve been visited by officers of many different, I guess, security entities, or police agencies, on fishing expeditions, as you all know. That’s what I call it, when they come here and say they need to come in and meet somebody, or they come to the door and try to browbeat somebody into letting them in. Without any warrant, without any authority. Just come in. And part of it, it seems to me, it tends toward harassment. Particularly now that we are struggling in court, and every single day, to protect our claim to this building. So last week there were [intruders] trying to get in. Under—

Mama —false pretenses. Exactly. And everybody who confronted them did a stellar job. We do not give names out. We do not even answer questions. Somebody says, “Have you seen this guy?” We don’t answer that. We don’t look at the picture and say, “Yes, he’s here.” But here’s what you can say every single time. “Do you have a warrant?” Ninety times out of ninety-one times, they don’t. “What are you here for?” And don’t let them in!

Man With Baritone Voice We had two police officers did that two weeks ago.

Mama Did they get in?

Baritone Man I told ’em they needed to come by tomorrow morning. Right now, we can’t help you. We have a confidentiality process, and we have to protect our clients. “Can’t we just go in there?” No you cannot, sir.

Baritone Man With all due respect, you cannot.

Mama Yes. That’s exactly the tone to take. And if you need to get Motley, get Motley.

Curtis Motley, head of security If you feel like it’s anyone who’s not familiar, or you think that’s standing out, or you’re not sure of, always come and get somebody, or try to seek and find out. We never know who of our enemies is trying to send someone in here to get some kind of dirt on us. Jerome?

Jerome Baker I just wanted to say, you brought up a valiant point. You know, we have to be mindful and vigilant of everybody who comes in here. Especially when they’re trying to come through that basement door. I was told of a situation where a security officer or a detective was in the building. Now, I don’t know whether that was before I came back or not, but one of the RVs [resident volunteers] asked him, “Do you need something?” And he said he was just lookin’ around. He said, “Who are you?” “I’m a detective.” And showed him his badge. And he was promptly escorted out of the building. All I was saying was, we need to be vigilant and mindful with people who come in, because you can just about tell if a person is homeless when he come through that door.

Mama Can’t always tell if somebody’s homeless or not by looking at them.

Another Man You smell ’em. 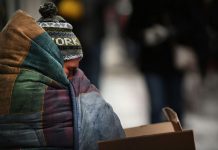