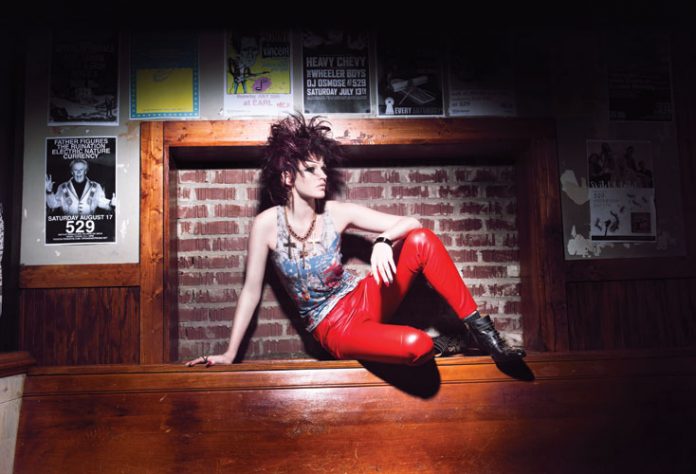 Fall looks are rife with studs, leather, plaids, and mesh, borrowed from the youth culture that lifted a middle finger at the corporate world in the seventies and eighties. Like it or not, this do-it-yourself style was long ago commodified and hung on the racks of upscale department stores. As evidence of its further evolution (or devolution?), the movement recently inspired an exhibition at the Metropolitan Museum of Art’s Costume Institute—Punk: Chaos to Couture. Here’s a quick history of Atlanta’s punk scene, plus a modern take on the throwback style at East Altanta Village’s 529 Bar, one of a few local venues carrying on the punk legacy.

Thirty-five years ago, punk made a lasting impression on Atlanta’s music scene. On January 5, 1978, the hell-raising British band the Sex Pistols made an unlikely American debut at the Great Southeast Music Hall in a shopping center now known as Lindbergh Plaza. Fans lined up on the sidewalk next to a Winn-Dixie. Journalists swarmed the place, and there were rumors the band might attack the media. Vice squads from Atlanta and Memphis came to quell any violence.

When the Pistols finally came out in all their sneering glory, they played for less than an hour. Johnny Rotten wore a tuxedo vest and a tousled skinny tie; Sid Vicious was shirtless in black pants with a bondage belt and a chain necklace. They opened with “God Save the Queen,” closed with “Anarchy in the U.K.” A few of the 500 pogoing fans threw beer cans, and the Pistols cursed and flipped birds, but there were no riots, no truly indecent acts onstage. The crowd spat more than the band.

Reports are varied on the caliber of the music that night. Steve May, who was then doing production for Prince and later opened the 688 Club, was in the sound booth. “I’m not even sure if Sid Vicious had his bass plugged in for the first half of the show,” he says. “They were terrible.”

But what they lacked in quality, they made up for in influence. According to May, the highly publicized show helped change the perception of Atlanta music, exposing an alternative scene in a city then known best for Southern boogie.

Self-described groupie Jill Griffin, who now works at a health insurance company and still lives in Atlanta, remembers tracking down the band at a drag bar, the Sweet Gum Head, on Cheshire Bridge Road. After the show, Sid went home with one of her friends, and the next day, the band’s manager, punk icon Malcolm McLaren, showed up at Griffin’s apartment asking after Sid’s whereabouts. “Sid was just a hot mess,” Griffin says. Turns out he’d slit his wrist with a letter opener at her friend’s house and had to go to Piedmont Hospital for stitches. He continued the tour in Memphis the next night with a bandaged arm. Eight days later, the Sex Pistols played a show in San Francisco, then broke up for good.

The Pistols showed up in Atlanta just as punk was creeping out of the city’s underground. At the heart of the scene were a few club owners. There were May, who opened 688 on Spring Street in 1980, and Paul Cornwell, founder of the sometime punk club Metroplex, which opened in 1983 and hosted national acts like Bad Brains and Suicidal Tendencies as well as hordes of alienated youth in leather jackets and steel-toed boots. There were also Clark Brown of the Blue Rat Gallery, a little venue below Midtown’s Pershing Point Apartments, and Chris Wood, the outlandish front man for one of Atlanta’s first punk bands, the Restraints. A classic cult figure, Wood was known for stage antics like shooting a hypodermic needle into his head and swinging around a loaded pistol.

“Chris Wood and Clark Brown served as the father figures of the time,” says Andy Browne, singer-songwriter for the Nightporters, one of Atlanta’s best-known new-wave punk bands (a nostalgic low-budget documentary about the band, Tell It Like It Is, premiered at the Plaza Theatre in April). “They made sure the homeless waifs all had food in their bellies and beer and such. Pershing Point was home—it was ground zero for all the rockers, musicians, dancers, punks, wannabes, and just about every kind of lunatic you can imagine.”

But Pershing Point Apartments was leveled in 1985. A year later, 688 closed because of financial problems, and Metroplex shut its doors in ’88. The old clubs may be gone, but the punks who haunted them will tell you punk’s not dead. Various bands around Atlanta still channel the old-school rebellion. More than being about a place or an era, the fashion or even the music, according to Cornwell, “punk is an attitude.”