You have a personal connection to this story.
I was a reporter at the AJC, and I witnessed an electrocution. It’s something you never forget. It was particularly interesting because the inmate gave a last statement that said, basically, “You’re as guilty as I am. Yes, I killed someone. But so are you.” He flipped the moral question back onto the executioners. Years later I was the op-ed editor for the AJC when Troy Davis was up for execution. I was researching that and came across this case where six people were executed in one day. I thought it might be a single crime, though it was not. My great-grandfather was the warden at Reidsville in the 1930s. It also turned out that E.D. Rivers was the governor, whom I’d always known as the New Dealer, the so-called progressive.

And you found that Rivers was not the progressive he was cracked up to be.
A lot of people joined the Ku Klux Klan in the twenties and then moved on. He kept on with his association with the group. Even way up into the thirties.

Why did he maintain that association?
Part of it was politics. But that didn’t get him elected governor. He latched onto the New Deal. He was also close friends with Hiram Evans [the KKK’s Imperial Wizard throughout the 1920s and 1930s, who lived in a home on Peachtree Battle Avenue]. It was about making money.

Where did you find the source material for this research?
You start reading other books about the Klan and they’ll mention Rivers. And you go to the footnotes and it points to the UGA archives. You go into those boxes and you’ll find things like a Klansman’s hood. A lot of these things are recently donated. They always seem to show up in a barn or attic, and a family finds it and donates it to UGA. And within the archives, there was a piece of paper—a memo—from Hiram Evans saying, “I’m appointing these people Great Titans.” And one of them was Rivers.

Let’s back up. How did you come to see a book in all this?
I pulled up the news stories from the execution [on December 9, 1938]. Six people—each of them black—are dead, and there’s this one white defendant who was spared by the governor. I figured you could use it as a comparative model. It would be a great way to study the inequality or equality of the death penalty. Because all the other conditions were the same. You could almost approach it in a scientific way. How could one person die and another not?

What surprised you most in researching this book?
Five of the six executed men were turned over to the Georgia anatomical board. It was a way to get cadavers for the medical schools. One of the inmates asked the guards to read a passage from the New Testament at his execution. He asked that it be put on his tombstone. But he never got a tombstone. The mother of one of the condemned men had stormed into the Muscogee County Board of Commission and demanded they bring her son’s body back to Columbus. They said they’d do it, but his was one of the bodies turned over as a cadaver. It turns out that only black bodies were turned over to the anatomical board. [Beasley writes in his book: “The register of inmate deaths at Tattnall from 1937 to 1941 shows no white bodies were donated for cadaver use during those five years, while fifty-three black corpses were taken. Racial discrimination seemed to have no end, even after death.”]

What’s your own opinion of the death penalty?
It’s a problem—mainly the arbitrariness of it. At the end of the book, I mention Brian Nichols [who escaped from custody in the Fulton County courthouse in 2005 and ended up killing a judge, a court reporter, a sheriff’s deputy, and a federal agent]. There was no doubt [of his guilt]. But he ends up getting a life sentence, where other people, including Troy Davis, where there was a lot of doubt, gets executed. It’s the same old question.

Meet the author: At 3 p.m. on Sunday, February 2, David Beasley will speak and sign copies of his book, Without Mercy, at the Auburn Avenue Research Library. 101 Auburn Avenue, afpls.org/aarl

Read an excerpt from Mercy for Some 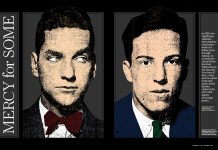