If you haven’t eaten in a school cafeteria in a while, you might find yourself both relieved and horrified by its evolution. The ubiquitous Jell-O and canned green beans of yore are gone, but pizza and chicken nuggets still rule. Children as young as kindergartners are allowed to choose burgers and flavored milk (twenty-two grams of sugar per cup, as opposed to twelve grams for plain milk) day after day. Fresh produce—even a simple salad bar—is a rarity. And this in Georgia, which produces more market vegetables than all but three other states in America.

Why, given Georgia’s agricultural abundance, is it so hard to get more of those vegetables into our schools?

“Anyone who tells you it can’t be done is wrong. Schools make up stuff all the time and then tell you it’s the law,” says Ann Cooper, a Colorado chef, author, and nutrition advocate known as the Renegade Lunch Lady. Cooper, who recently visited Atlanta’s Maynard Holbrook Jackson High School, travels around the country speaking to parents, schools, and legislators—trying to make regionally grown, fresh foods the new normal in student lunchrooms. “When you feed kids healthy foods, they perform better, there are fewer behavioral issues, and kids can learn,” she says.

Even though the urgency couldn’t be greater (Georgia ranks number two in childhood obesity rates), serving locally grown produce is no simple goal. Modern school kitchens are designed to unpackage and reheat, so equipment for storing and preparing fresh foods—coolers, mechanical vegetable slicers and choppers, two-compartment produce-washing sinks—is missing. And kitchen workers may lack the training to prep large quantities of fresh produce.

Of course, school systems also struggle to stay within tight budgets. The federal government reimburses them $2.77 for each free lunch and $2.37 for each reduced-price lunch. In Georgia just over half of all students qualify for one or the other. According to a 2009 Georgia School Nutrition Association report, the state’s school cafeterias get 56 percent of their money from Uncle Sam—twice as much as they get from paid lunches. (State taxpayers fund a paltry 5 percent.)

In December 2010, President Obama signed the Healthy, Hunger-Free Kids Act of 2010, the first major reworking of the federal school lunch program in fifteen years. The USDA promptly submitted new regulations that would have given schools an extra six cents a meal if they encouraged more fruits and vegetables, more whole grains, and less sodium. However, late last year, Congress bowed to pressure from groups such as ConAgra, Coca-Cola, Del Monte Foods, and the American Frozen Food Institute and blocked the proposed rules, which would have added about fourteen cents to the cost of each lunch by USDA calculations.

There are also logistical obstacles. District nutrition directors design menus to meet USDA guidelines. Once menus are planned—usually months in advance—nutrition directors must follow federal bidding procedures for purchasing ingredients. The process can favor large, experienced vendors and reliably available foods, such as frozen vegetables—not to mention commodities, mostly meat and dairy, provided cheaply by the federal government. (Nutrition advocates charge that the feds use schools to absorb overproduction encouraged by their own farm subsidies—and that the food is usually overprocessed by the time it hits the plate.) Moreover, contracts are sometimes set long before buyers know what will be fresh and abundant months later.

Sourcing locally grown produce can challenge the system. Last school year, a beaver got into a field in Athens and destroyed a Bibb lettuce crop intended for Gwinnett County Public Schools; the supplier had to scramble to find another source. Measurements can differ. Farmers may sell by the bushel or bucket, but nutrition directors are used to dealing in pounds. And even deliveries can be tricky. Schools may be staffed to accept deliveries between 8 a.m. and noon, but a farmer may plan delivery routes around stocking grocery stores overnight.

“You’d think it would be really easy [to get more locally grown produce in the schools], but there are so many people who end up being the gatekeepers, and there are roadblocks that really shouldn’t happen,” says Ashley Rouse, who in 2010 cofounded Atlanta Farm to School, which tries to connect Atlanta Public Schools to local farms.

Last year Rouse—then a sustainability specialist for Sodexo-Jackmont, which operates APS kitchens—lined up free training for APS kitchen managers with help from Georgia Organics, the Cook’s Warehouse, and Freshpoint, which even pledged to present each participant with a knife and case. But the training didn’t happen—because, according to APS nutrition director Marilyn Hughes, the contract between APS and Sodexo requires all training to be conducted by Sodexo. (However, according to Sodexo spokesman Greg Yost, the company encourages training partnerships with local organizations and is even working with the Southeast United Dairy Industry Association on a series for APS culinary teams.) Instead, the Cook’s Warehouse partnered with Decatur schools.

In fact, the Decatur school district has been one of the metro area’s most proactive systems. At College Heights Early Childhood Learning Center, parent volunteers noticed the enriched Super Donuts served in the preschool’s cafeteria. Katherine Falen, whose son is now in the second grade, says, “It’s a very nutritious doughnut, but our concern was that our children were eating a doughnut for breakfast and were getting the wrong message. When they got out into the real world, the doughnuts wouldn’t be supercharged.”

In 2009 the College Heights parents formed the Decatur Farm to School Initiative and, with help from Georgia Organics, explored strategies for bringing local food to their center. The school board was enthusiastic about their ideas and asked them to develop programs for all eight city schools.

Now a branch of the Oakhurst Community Garden Project, the initiative supports a community garden at Decatur High School and teaching gardens at most of the other schools. Last year students grew 115 pounds of organic kale, which was served in sauteed samples to all Decatur schools. The results: Out of 2,235 students who tried the kale, 1,466 reported that they liked it. That’s right—the students said they liked kale.

“Some of the kids made posters and PSAs about trying kale,” says Jennifer Weissman, a Decatur parent and part-time school nutrition department employee. “They were excited about it in a way that they aren’t always excited about trying new foods.”

Decatur students in the fourth grade and higher can also create their own meals from salad bars partially stocked with local produce. The bars were provided through a grant from Whole Foods Market and Let’s Move Salad Bars to Schools, a public-private partnership founded by the National Fruit & Vegetable Alliance, United Fresh Produce Association, and Cooper’s Food Family Farming Foundation that aims to install 6,000 salad bars nationwide by 2014.

Other Georgia schools are making strides too. This spring, as part of a pilot program by the Georgia Department of Agriculture, three elementary schools in Hall, Bleckley, and Colquitt counties will serve lunches of at least 75 percent Georgia-grown food for a week. The exact schools and foods are still being determined. “It’s a very big baby step,” says Melanie Hollingsworth, the department’s first nutritional educator and outreach specialist. “It’s really the Georgia Department of Agriculture’s first effort to get involved in school lunch in a major, major way.”

Patchwork City Farms, a multi-family-owned urban farm in the West End, has planted a garden at Brown Middle School and is teaching the children about gardening. Math teacher Kenda McAllister has formed an after-school garden club and recruited about ten students. In its first meeting, they harvested sweet potatoes planted over the summer. McAllister hopes the club will help generate more interest for APS lunchroom initiatives already in place—such as a featured local vegetable of the month—and those she hopes to start, like healthy food demonstrations with occasional items from the garden.

“If pizza is offered every day, pizza is eaten every day,” McAllister says. “Imagine eating a whole chocolate cake, which is really the equivalent of pizza and chocolate milk, and then having to go back to class and focus.”

Those options still exist in Decatur schools, but not every day. In 2010 Decatur High eliminated a la carte options like pizza, Buffalo wings, and chicken nuggets from the cafeteria, leaving students with a choice between the hot food line (which does sometimes serve pizza and the like) and the salad bar.

“On the first day, kids were like, ‘Where are the french fries?’” Weissman says. “They were disappointed. But they got used to it, and now lunch sales have gone up because that’s what there is to eat.”

But even in a small school system like Decatur, change is “really hard,” she says. “We can’t afford to switch to all-organic, locally grown, cooked-from-scratch. But we’re all making small changes as we can.”

Grading the meals
In the month of October, I ate in three school cafeterias—Decatur’s 4/5 Academy at Fifth Avenue, Nicholson Elementary in Cobb County, and Brown Middle in Atlanta—as an invited guest. Here’s what I saw and tasted:

Nicholson Elementary (Cobb County School District)
Published menu: Cheese or pepperoni pizza with breadstick, baked potato with cheese or beef and cheese with breadstick, tuna salad with crackers, vegetarian chef salad with crackers. Sides: broccoli with cheese sauce, glazed carrots, “cucumbers & friends,” fresh fruit, 100 percent juice, fruit fiesta.
What I saw: Cheese pizza, seasoned black beans, broccoli with cheese, fresh diced kiwi fruit. Low-fat and skim milk, strawberry-flavored fat-free milk, orange juice, ice cream treats.
How it tasted: Not bad. The pizza tasted like a midgrade frozen pizza you’d find in the grocery store. The light cheese sauce on the broccoli (from frozen, I’d guess) was complementary, not overwhelming. The black beans were truly delicious: flavorful, just a little spicy, and essentially fat-free. My dining partner noted that the kiwi was slightly underripe, and because it was unpeeled but cut into chunks, it was difficult to eat with just a plastic fork.

How it tasted: Not so great. The macaroni in the pasta bake was overcooked, and the school used plain pasta instead of whole wheat. However, the tomato, pepper, and carrot mixture was light and tasty. The romaine salad was minuscule (perhaps one-fourth of a cup), heavily cut with iceberg lettuce, and spongy but dry. The bread was dense and flat, as if it had gone directly from freezer to oven without a chance to rise first. The orange was good. 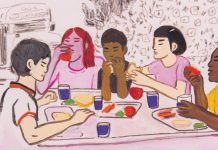