Remnants of English ivy cling to the tree trunks. Hacked off about seven feet above the ground, their leaves withered, the vines now resemble twisted ropes. They were felled by the blade of Jeremy Dahl, aka Machete Man, who is saving metro Atlanta’s forests by removing the invasive species slowly strangling them.

“This is what I call a little refuge, a little Noah’s ark,” says Dahl, as he surveys a grove he cleared in Avondale Estates. New oak seedlings and saplings sprout in a space once overgrown with privet. Dahl points to the tall oaks and tulip poplars emerging like arboreal skyscrapers. The patchy woods in metro Atlanta backyards are pieces of the ancient Piedmont forest and need to be healthy to regenerate and sustain wildlife.

Dahl is 65. Over four decades, in his work as a physical anthropologist, he conducted field research in the rain forests of Belize and studied primates at the Yerkes National Primate Research Center in Atlanta. He had long been concerned about the degradation of Atlanta’s urban forest, and when his work at Emory ended, he struck out—literally—on his own.

He spent four years teaching science at the Atlanta School and also founded the Deep Forest Field School to teach children about conservation. Students take measurements of ambient temperatures and light levels, observe the forest growth, and learn about habitats. Dahl supports the nonprofit with a forest-clearing business.

Dahl and his team avoid herbicides, relying mostly on machetes, a technique borrowed from the Vietnamese martial art Cuong Nhu. By far his biggest and most important job is helping reclaim the 65-acre Fernbank Forest, the largest urban old-growth forest in the Piedmont region. Alongside volunteers and the Trees Atlanta crew, Dahl hacks relentlessly through the brush.

Fernbank ecologist Eli Dickerson says the impact is palpable: “The diversity of plants is much greater than when it was a sea of English ivy.” 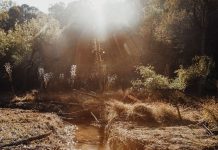 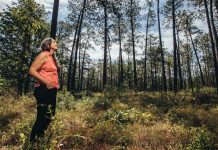 Georgia’s forests are a shrinking line of defense against global warming. Can Janisse Ray make us care enough to save them? 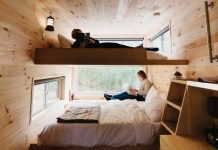