Jeff Arnold founded WebMD because he thought health should have a homepage. Early on, he met Dawn Whaley, who was a pioneer in dotcom-era public relations. “I call her Dr. No,” jokes Arnold on working with Whaley. “I think of myself as a glass-half-full type of person that tries to push the limits of what’s possible. I think the role Dawn plays is to be the healthy skeptic.”

The two have worked together ever since, collaborating on the Convex Group, a media and internet investment organization that ultimately acquired HowStuffWorks in 2002. That led them to Discovery Communications in 2007, where Arnold and Whaley found themselves on a conference call with Dr. Mehmet Oz, who was preparing to launch The Dr. Oz Show. “We had no idea what [the call] was about other than Dr. Oz was going to be brainstorming ideas,” explained Whaley. Bolstered by Arnold’s healthcare-homepage vision, he and Oz clicked. They founded a new health-focused company, Sharecare, bringing Whaley and Justin Ferrero, an alumnus from the Convex Group and HowStuffWorks, with them as copresidents.

“I’m excited to have a second bite of the apple with Sharecare,” says Arnold. Sharecare brings together medical information, biometric data, doctors, and employer insurance information, available through smartphones. Social components and gamification help users reach their health goals. “Think of this as Facebook with a purpose,’” Arnold says. The company has partnered with Walmart, the state of Georgia, and others to bring the platform to its workforces. They’ve also aligned with the Atlanta Hawks, being named the NBA’s Partnership of the Year last season. “At the end of the day, we all are incredibly motivated by the idea of truly making the world a better place,” Whaley says. “Sharing care,” adds Arnold. 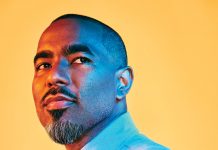