Chef-owner Asha Gomez built on the success of her Spice Route Supper Club and opened this pioneering restaurant specializing in the dishes of Kerala, her native state in South India. Fish curry perfumed with smoked tamarind, pork vindaloo glazed with vinegar sauce, and sultry beef curries (Gomez grew up Roman Catholic, with no taboos against meat) illuminate the Portuguese, Dutch, and English culinary influences of the region, which for centuries has been a prominent port for spice trading. Wade into the new flavors with Gomez’s popular version of fried chicken, scented with citrusy curry leaves and coconut oil and served over Lowcountry rice waffles. The food, calming interior, and polished service add up to a revolution in local Indian dining.

Best of Atlanta 2013: Indian
Leave your precious Indian-restaurant experiences – the sodden, unevenly spiced curries; the repetitive menus of tikka masala and saag paneer – at the door of this intimate Berkeley Heights boîte. Chef-owner Asha Gomez takes her singular cooking in two directions. She re-creates the dishes of her childhood in Kerala, on the subcontinent’s southwest coast: beef humming with sweet spices alongside cool yogurt rice on banana leaves, fish in a sauce zinged by a smoked fruit called kodampuli. Gomez also marries the flavors of the Indian South with the American South, experimenting with dishes like surprisingly delicate pickled catfish. The Kerala fried chicken over waffles makes converts out of those who swear they dislike any form of Indian food. 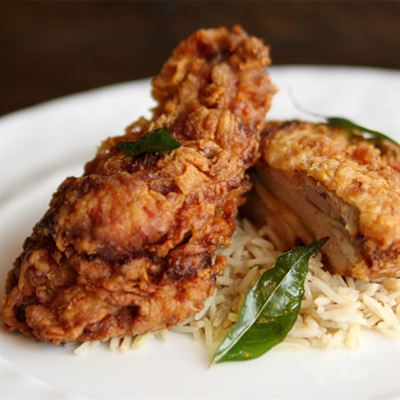