We underestimated how voraciously East Cobb locals hungered for their own splashy restaurant. We arrived at 6:30 on a Saturday night just after it opened in late 2011, expecting to snag a table without a reservation. “We’re fully committed until 9 p.m.,” said the hostess with more pride than regret. We practically leapt into the last two available spots at the fourteen-seat bar before a crowd mobbed the waiting area behind us.

Who’s generating this much buzz in the burbs? Doug Turbush left his executive chef position at Buckhead’s fusion-themed Bluepointe (which ended up closing in November) to launch a place in his own hood. His menu reflects a refreshing mélange of global influences: gently cooked shrimp tossed in the intense South Asian chile sauce called sambal; Lyonnaise salad starring bacon, curly frisée, and an egg first poached and then deep-fried; flounder with Thai herb vinaigrette (pictured); crisp (and slightly too thick) chicken schnitzel.

The thoughtful drink list covers craft beers, classic cocktails, and more than two dozen wines by the glass. Early on, this one looks like a coup for OTP dining. 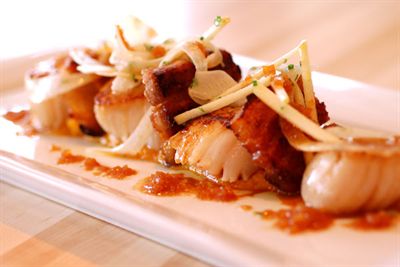