Peter Cheng first bewitched local chowhounds with his fiery but nuanced Sichuan cooking at Marietta’s humble Tasty China in 2006. Cheng left soon after for other Southern towns, whipping up devotion and enigma as he wandered. Articles in the Oxford American and the New Yorker appeared about him in the same month in 2010—around the time he began frequently popping up at Tasty China again.

This next chapter in the Cheng legacy finds the chef in a large, slightly spooky building that resembles a ski lodge stuck in the Twilight Zone. The enormous menu explores way beyond Szechuan specialties: Cheng seems to want to please all palates with the broad swath of Chinese dishes. It can make ordering a spectacular meal a challenge: The waitstaff is incredibly uneven in its proficiency, and the tome of a menu can make your vision blur.

Dive in with classic Cheng scorchers such as hot and numbing hot pot and dry-fried eggplant, which registered as milder than the versions at Tasty China, but the contrast of crisp and soft textures still thrills. Shrimp gently sauteed with asparagus and red peppers revealed Cheng’s delicate side. 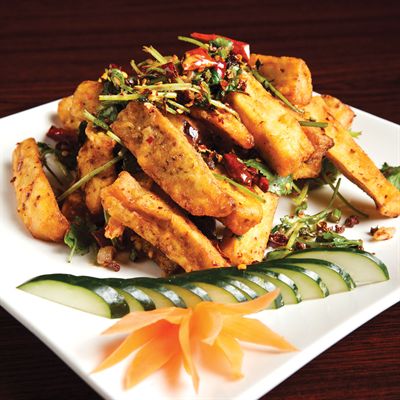