It took me awhile to warm to this ambitious Southern-themed Downtowner, which opened in July 2012. The owners of Max Lager’s tackled the challenge of the massive ground-floor space in the 270 Building, last occupied by All Star Cafe more than a decade ago. An early lunch included thick, pasty pork buns and an odd service snafu in which half the entrees for our group of four arrived nearly fifteen minutes apart, with no explanation and little apology.

Dinner several weeks later proved a much better experience all around. The menu doesn’t offer regional dishes so much as Southern sides and sauces (greens, potlikker, Alabama-style white barbecue sauce) arranged around familiar proteins in busy but harmonized ways. The approach particularly succeeds in the entree of duck breast with sweet potato–bacon terrine, duck confit, and redeye ham gravy. 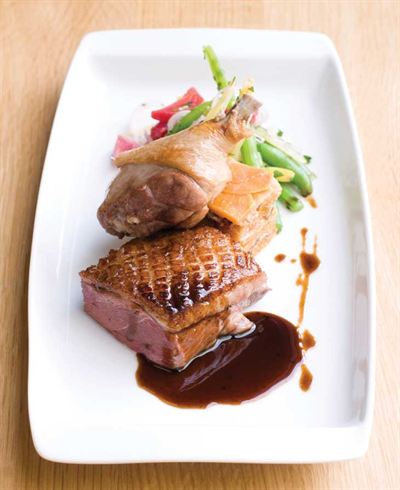