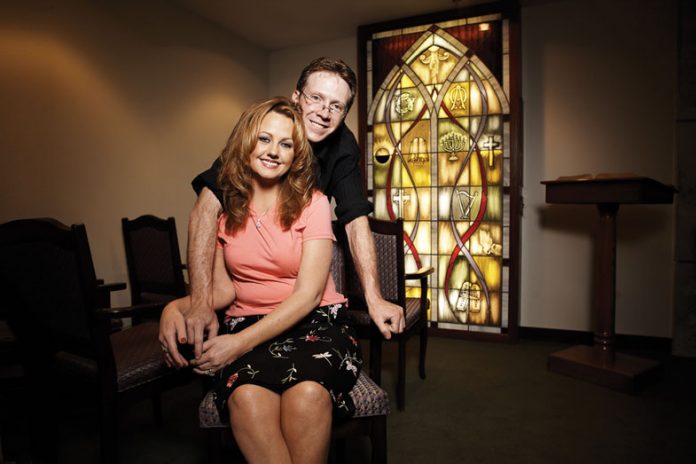 Jeremy had gone hunting, so two days after Christmas, Brandy Green rose late to make breakfast alone. She and Jeremy lived in a small, white-brick ranch house near Brandy’s parents in Ellijay. Together six years, married three, they were having trouble getting pregnant and Brandy had started fertility treatments. She thought about this as the coffee brewed.

Brandy has Elizabeth Taylor eyes, fair skin, and reddish hair. She was a high school cheerleader and still has a youthful face, but at age twenty-nine, she already knew death. Four people close to her had died within the previous year.

That morning, December 27, 2003, she took a few sips of the fancy coffee Jeremy had bought for her. Suddenly the room turned white, fuzzy, and she fell shaking to the linoleum floor. She’d never been pregnant, but it felt like contractions. That’s how she described it later, to the procession of doctors and nurses. Now she lay half inside the bathroom door, thinking she might hemorrhage, thinking it could be a miscarriage, then thinking nothing at all, soaking wet. By the time Jeremy stopped in unexpectedly, late that night, she felt better and sent him back out to the woods. He trusted her. She knows if she’s bad off.

Brushing off the incident, she waited to see a doctor until her regular checkup two weeks later. Her ob-gyn did a vaginal ultrasound and concluded the problem had probably been benign fibroid tumors in her uterus. So Brandy Green kept on using the progesterone, kept on trying to get pregnant, kept on doing clerical work at Northside Hospital–Cherokee. Valentine’s Day was particularly romantic that year, she remembers with a little smile that quickly fades. Two days later, her stepbrother died from a brain tumor.

On April 26, 2004, Brandy began hemorrhaging at work. During the next few days, doctors would order an MRI and then a biopsy. During one exam, she started bleeding all over the table and floor as if in labor. The doctor, shocked, left the room as Brandy tried to help clean up the blood. She was scheduled for surgery the following morning. Twelve pounds lighter than she had been at Christmas, with sallow skin, she readied herself with prayer.

The tumor discovered in Brandy’s uterus was six centimeters wide and it had tentacles. For the past four months she had essentially been giving birth to it. The doctors removed it successfully but warned that it was either cervical cancer or the rare and lethal glassy cell carcinoma. Either way, she’d need to have a hysterectomy. Brandy told Jeremy to sell the house, she was going to die. She whispered to God to take charge. Please, don’t let man have the final say.

In May, she and Jeremy were on GA 400 when they got the call: It was glassy cell carcinoma. Only three cases are diagnosed each year in the entire Southeast, and almost none survive. Surgery, now imperative, was scheduled immediately. At an Outback Steakhouse they made plans, futile as it seemed to her. Everyone else has died this year. I will too.

During surgery at Northside Atlanta, doctors found another tumor, this one on her bladder. It was like fingers. The fertility drugs had made the tumors grow faster. The doctors removed six lymph nodes, leaving the bladder. Chemotherapy and radiation would attack the remains, five days a week for five weeks. The radiation tore her up. Like putting butter on bare skin and sitting in the sun. A nice tan, she’d later laugh about the second-degree burns. The burning got so bad she couldn’t pee without sitting in cold water.

Brandy’s grandma Barbara, it was said, could take the heat out of burns with her breath, and every day she anointed Brandy with a prayer cloth and oil. The nurses said the cloth held bacteria, that she couldn’t take it into surgery, but Brandy was adamant. Well, that’s not all it holds. The plain white handkerchief, blessed by her Uncle Joe Wayne’s congregation, was tied around her wrist when she went to the doctor, and tucked under her surgical cap in the OR. For a while, she and Jeremy took communion every night. At the hospital, it was crackers and grape juice.

Finally came the excruciating seed implants at WellStar Kennestone Hospital: internal radiation for two straight days in a lead-lined room. I was radioactive for forty-eight hours, starving to death, thirsty, unable to move, seeing things that weren’t there. Ghosts came in and out of the room, nurses and visitors followed for a few minutes at a time. Jeremy sat in the hall with her screams. The doctors said her best-case scenario was two years before a recurrence. Two weeks later, she got a different prognosis: The cancer was gone.

There were eventually eight surgeries. Eating, sleeping, and going to the bathroom are still difficult, but Brandy is smiling. On August 4, she will have been in remission for six years. The Greens wonder how she did it. She remembers telling herself: Lord, I’ve just gotta prove them wrong for two years; after that you can do whatever you want with me. But I keep getting in God’s way.

Pictured: Brandy and Jeremy Green in the prayer room at Northside Hospital; photo by Neda Abghari