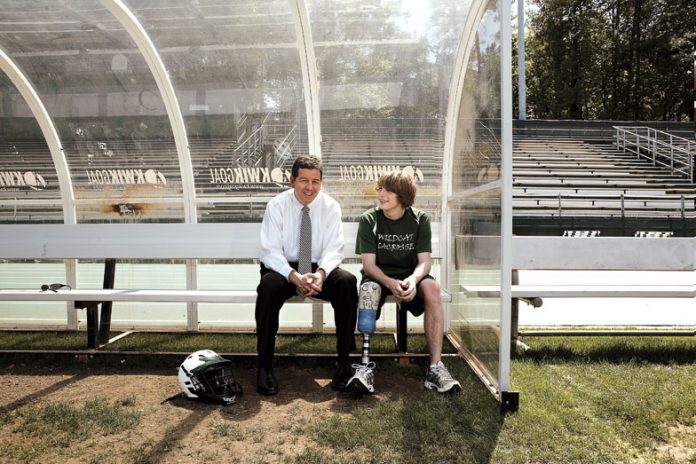 Michael Moore was the first person to save seventeen-year-old Scott Dolezal’s life last year. The Westminster Schools maintenance staffer just happened to come into work that Saturday, August 1. He just happened to drive his utility tractor the long way around campus to avoid disturbing parents who were watching preseason cross-country trials. And he just happened to glance back over his shoulder after he passed a runner along the wooded trail—at the very moment the runner toppled silently into a deep ravine, where he hung hidden and motionless, feet tangled in brush, suspended headfirst over a creek.

The first spectator who heard Moore’s cries for help just happened to be a doctor, Bill Barber, a surgeon at Piedmont Hospital. He tore open Scott’s shirt to start CPR and spotted the telltale scars, left behind by neonatal heart surgery that could not prevent sudden heart failure in the growing teen. The school’s athletic trainer—the one with the master’s degree who headed straight for the defibrillator—just happened to have begun her new job fifteen minutes earlier. On the second shock, Scott’s heart started again. For the next few days, it would be hard to believe everything that “just happened.”

When Barber arrived at the scene, he says, “My first impression was that someone had just found a body. It looked like he had been dead so long that there would be no hope of survival . . . We witnessed an unbelievable series of miracles . . . The right people just kept seeming to be in the right place at the right time.”

Cardiologist Anna Kalynych was waiting when the ambulance arrived at Piedmont. She inserted a cardiac catheter as the EMTs moved Scott onto the table, then quickly induced hypothermia and a coma to save his brain function. In layman’s terms, Scott was frozen.

Kalynych then called Vivek Rajagopal, an interventional cardiologist who had recently moved to Piedmont from the Cleveland Clinic. He was also the only doctor in Atlanta fully trained in placing a new fast-acting heart-lung bypass device called the TandemHeart in adults rather than neonates. Rajagopal was not on call but happened to pick up his cell phone. He called his sister to come watch the kids.

As Rajagopal and cardiovascular surgeon Morris Brown scrambled to start bypass, Kalynych counted out loud the seconds Scott had left to live. The teen’s heart, repaired surgically for a congenital defect when he was a week old, had grown twisted, making it impossible to insert the device on the preferred left side. As the clock ticked down to the last five seconds, the doctors switched sides and got in. Again, they had saved Scott’s life. But the orientation compromised blood flow to his right leg. Scott was too unstable for surgery, so Rajagopal improvised in the ICU—threading a tube under his skin from one leg to the other, providing enough blood flow to save most of the limb. When they warmed Scott back up, his organs came back to life. After the ventilator tube was removed, he turned to his older brothers and asked simply, “’Sup?”

Although Scott would eventually lose the lower part of his right leg, his knee survived, allowing him virtually full range of motion with a prosthesis. He had surgery in October to reconstruct his heart and returned to Westminster in January. With luck, he’ll be playing lacrosse again next spring. This year, his thoughts were more on the ACT, junior prom, and his date, Annie.

Scott’s mother, Lucy Mueller, is a labor and delivery nurse at Piedmont. She was at work when Scott’s dad, Craig Dolezal, called from the track, so she instinctively ran for the ER. Visions of that day haunt her still, but Scott remembers little. Some events didn’t fall into place for him until he saw the hospital’s Facebook video. The first time he and his family watched it, they cried.

Though not a cardiologist, Barber became “Captain” of “Team Scott,” largely coordinating Scott’s care during the fifty-one days he was at Piedmont. “This one case made every single bit of [my medical career] worthwhile,” he says. “All that physical chemistry somehow became worth it in one day. This is the reason that you go into medicine. Finally, we’re not talking about twenty-dollar copays.” When Barber walked into Scott’s room two days after the accident and saw him sitting on the side of the bed talking with his mom, he texted his wife Rosemary: “I have witnessed a miracle; only God could do this.”