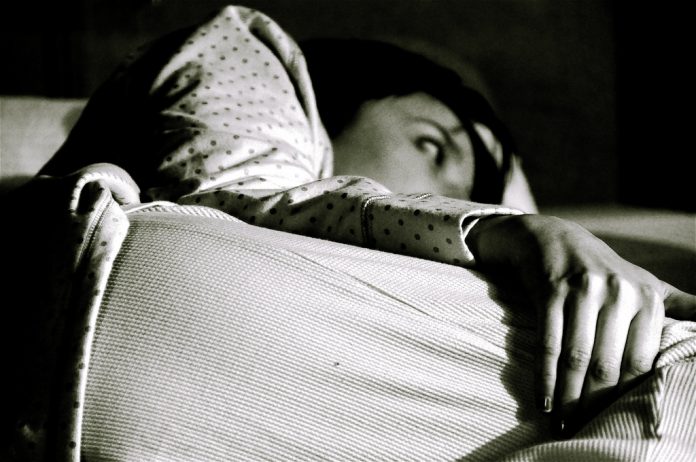 I live with a man who at 10 p.m. can drink a caffeinated Diet Coke, fire off twenty emails, read a New Yorker article on his backlit iPad, and then abruptly say goodnight, turn off the light, and fall asleep in less than fifteen seconds.

As he snores away, I seethe.

On a typical night I will lie there for hours, waiting for sleep to come. I’ll take deep breaths, do a crossword puzzle, eat a snack, moisturize, watch TV, have a glass of wine, take a bath, mutter mantras, read a book, sniff lavender, stare at the clock. I’ll count how many minutes and hours have lapsed without sleep, and how soon the dreaded morning will come.

Sleeplessness has been linked to all sorts of health issues: vascular problems, immune system problems, mental health problems, “brain waste removal” problems (wha — ?). Just thinking about that list is enough to keep me awake an extra hour or two.

“Every insomniac is a little bit different, and that’s what makes it so fun to treat,” she says. “Every person is a puzzle to figure out. You can look at a basic set of behaviors, but it doesn’t necessarily get to the deeper underlying problem.”

For people like me, there are a lot of negative and anxious emotions around sleep—why won’t it come? How will I get through tomorrow on six, no five, no four, no three hours of sleep?—and bedtime has ceased to be restful.

“The ‘trying’ to fall asleep is torture,” she says.

Here are some of Bartolucci’s general tips for the sleepless:

— Don’t go to bed until you are sleepy. Sounds obvious, but it’s not. Once I’m done watching a recording of The Walking Dead (the television equivalent of a warm bath) and see that it’s 11 p.m., I say to myself, “welp, I guess I should go to bed,” even though I’m not knackered. Bartolucci says you should stay up until you’re truly drowsy, even if that means staying up much later than usual.

— Get up at about the same time every day. Routine is important. If your set wake-up time is 7 a.m. and you can’t fall asleep until 4 a.m., you’ll be tired that first morning. But maybe the next night you’ll be able to fall asleep by 2 a.m. Eventually you should become more and more tired at night and be able to conk out earlier and earlier.

— Skip caffeine after lunchtime. Caffeine has a half-life of three to seven hours in the body, so that frappe pick-me-up you guzzle at 3 p.m. could leave you wide-eyed in bed at 10 p.m.

— Avoid naps. Oh, blessed naps, how I love thee. I nap like a champ. I can fall asleep during the daytime in seconds flat. But a two-hour siesta during the day does me no favors when it comes to bedtime. Bartolucci says that if you must nap, try to keep it short.

— Don’t pick up your electronics when you can’t sleep. The temptation is to send off one last text or peruse the gossip blogs when you’re lying in bed awake. But the backlight of most devices has been proven to increase wakefulness.

— Try to avoid medication. It can be useful as a tool but not as a long-term solution.

— Seek professional help if the sleepless nights persist despite all your efforts to combat them.