Home Coronavirus Dr. Michelle Au: “I started sleeping in the guest room in the...

For our 21st Century Plague project, we spoke with 17 Georgians about the toll of COVID-19. Below, Dr. Michelle Au—an anesthesiologist at Emory St. Joseph’s Hospital—describes the preparations at her hospital and explains why intubating patients is one of the riskiest procedures for physicians. (Au was interviewed on March 19.)

I first started hearing about the virus after Christmas. But the news still felt like something distant. It was in China, so you’re watching with this detached interest. I am in the unusual position of being a Chinese American physician with a public health degree who also happens to be running for office [Au is a Democratic candidate for the 48th state Senate district, which incorporates parts of Fulton and Gwinnett counties]. I was talking with voters in the Chinese community who said that I should be speaking out on the issue more.

I probably should have paid more attention. I should have taken it more seriously. But at the time I was almost loath to wade into what I felt was a niche concern that was distant from the country and from our state, because I am running for state office. And especially as a Chinese candidate I was concerned about focusing too much on what were at the time non-local concerns. There were no cases in the U.S. Obviously, we’re in a different situation now.

I think when it started getting more real was when we started seeing the pockets of outbreak in the country that were clearly local transmission. That it was not attributed solely to travel abroad. When it became clear there was local transmission in Washington state and other places and it had been spreading in the community for probably weeks undetected because we weren’t looking out for it and weren’t testing, that’s when we realized this is serious. It started to feel like you’re wading through invisible floodwaters that you weren’t aware you were in.

I started making provisions for myself getting sick. As an anesthesiologist, I’m on the hospital’s emergency airway team. With COVID-19, one of the endpoints is respiratory failure, requiring ventilators. A lot of discussion we’re having now is, Are there enough ventilators in the country? If everyone gets sick, do we have enough ICU beds to support people?

We decided at my hospital pretty early on that the anesthesia-attending physicians should be head of the airway team mainly because the act of intubating a COVID-19, patient is essentially the highest risk procedure you can do. As you’re putting in that tube and they’re breathing out through this channel you’re putting in, it gives an opportunity for the virus to be in the air. Usually it’s in droplets. Aerosolized virus can float around. It’s one of the most infectious potential procedures you can do on a COVID-19, patient. The person who is best and most senior and experienced at doing intubations should do it. They take the least amount of time possible. Put in the tube, quick, hook up the ventilator, and minimize exposure to everyone.

We know that some of the sick are going to be our colleagues. We know that the more we are going to engage the more people are going to be sick. Over the weekend I started sleeping in the guest room in the basement because it’s separate from the rest of the house. I have my own bathroom because I don’t want to share a bathroom with anyone. I’m very meticulous about hygiene now—I mean I always was because I work in the hospital—but now it’s like shower and change into clean clothes before I leave the hospital. And then I shower and change clothes again [once I’m home].

Some [colleagues] said they are going to start to rent a motel if it gets worse, so they can be fully sequestered from their families. Not a hotel room, because you don’t want to pass through a lobby—they want to be separate from people. We’re very afraid of infecting other people because we could be carrying and don’t know.

What can you do? You can’t not work. They need us to work, and we want to work. We don’t want to step back when we’re needed. We’re just very aware. You start to feel radioactive. Should I not be cooking dinner for my kids? Maybe I shouldn’t, I don’t know.

There’s a social contract we all have to live by for everyone’s good. But you really don’t know what other people are doing. You start to understand of what it’s like to have OCD. We have two bottles of bleach in our kitchen that we just spray everywhere.

Part of me thinks it’s overkill. Part of me doesn’t. You see people coming in who are really sick. And they didn’t know they were picking up something. They didn’t think they were exposing themselves to the point that they did. And I don’t get to stay away from sick people. Literally my job is to put my hand in sick people.

I have maybe an unhealthy habit of reading the news too much. When I wake up, I immediately check the newsfeed to see what the current numbers are. With this epidemic, everything is happening very fast. So even where we are now is unrecognizable from a week ago.

My workflow is very different now. My hospital has suspended all elective surgeries. We only do emergency surgeries now. You don’t want to bring in people for frivolous reasons and expose them to the risk of getting the virus from either us or other patients. We’re also acutely aware that we are going to be in a resource crunch extremely soon with respect to basic equipment. Not just the N95 mask. Even basic things like gloves, gowns, eye protection. These things that we used to take for granted because they used to just have them out, just in the background, and it’s just something you assume is always there. Now we’re acutely aware that, this stuff could run out.

Work is a little bit more anxiety-provoking because I know I’m walking into a new environment. The ORs are almost like a ghost town now because the amount of cases we’re doing are very pared down to just emergencies. A lot of what we are going to need to do is emergency intubations, help with the ICU, figure out what we are going to do when we run out of ventilators. Do we repurpose our anesthesia machines into ventilators? Does Environmental Services need to involved? How can we turn this room into a negative pressure room? Which means that the air sucks in rather than blows out virus. All ORs are positive pressure so when you open the door air blows out so that nothing comes in to contaminate. But that’s no good when you’re housing people with coronavirus in those rooms and every time you open the door you blow out virus. I don’t know what would have to be done to change the air flow around to become negative pressure so it sucks in. But these are the kinds of things that we’re involved in now at work. It’s a wartime, prepare-for-the-worst mentality. It feels good to be useful, but you have like a sinking dread feeling in your stomach.

I have a teenager who’s in 10th grade, an 11-year-old, and a seven-year-old. Obviously it hits them all in different ways. I think the older they are, the more they mourn the loss of that social structure that they have. Because friends are important. I’m not here all the time because I’m at work. So I worry about them becoming a little bit lost, that psychologically it’s difficult for them to have this mundane experience where they’re not learning and nothing is enriching enough. But what are you going to do? Everyone’s in the same boat right now

Everyone [at the hospital] has been so unflagging in their sense of duty and their willingness to run towards the fire that it really makes you proud to be there. It just feels good to be useful even though we’re aware that it’s going to put us in a lot of stress and risk.

Everybody feels a little bit helpless now and kind of unmoored. So it’s nice to have a reason to feel less so. It’s also doubled my commitment to run for office. There is a value having more medical expertise in the legislature; a focus on science-based health policy and prevention is vital.

Yesterday I cried talking to a high school friend. When you’re at home, because the kids are there you want to be like, Everything’s cool. It is so disruptive for them, so you put on the cheerful face. And at work, since I’m an attending physician and we see a lot of people all day, you want to put forth that everything’s under control. You get accustomed to trying to keep other people calm. But talking to someone that I’ve known before this, it was just an unguarded moment. What if I get sick? [My husband and I are] rewriting our wills right now. He’s a doctor, too. One of us has to stay well. 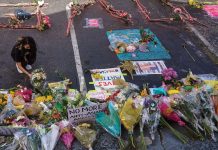