Home News & Opinion From the Magazine Ew! Meet Campy, the slimy bacteria that can make you super sick 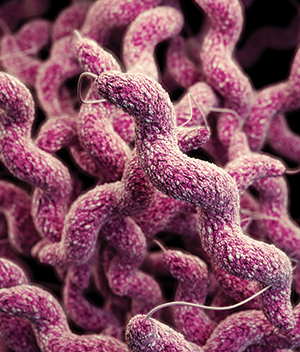 When it comes to bacteria, salmonella steals all the headlines. But the real newsmaker should be Campylobacter jejuni, says Stuart A. Thompson, a microbiologist at the Medical College of Georgia at Georgia Regents University in Augusta. “Campy,” as Thompson refers to it, is one of the most common causes of diarrhea, vomiting, and stomach pain. Annually, there are 1.3 million cases of Campy infection in the U.S. (compared with just 42,000 lab-confirmed salmonella incidents). Thompson recently received a $1.5 million grant from the National Institutes of Health to learn more about Campy and the film that helps protect it.

How do people get Campy? The most common well-documented route of infection is when people eat undercooked poultry or cross-contaminate foods, countertops, or cutting boards with poultry juice. It’s a common inhabitant of a chicken’s gastrointestinal tract. When the poultry is processed, the contents can get on the meat. Just the tiniest bit of it is enough to get you sick.

It also lives in the GI tract of migratory birds. That’s one of the directions my research is going. There are seasonal peaks of Campy in summer that are unexplained. That’s when people are barbecuing and don’t cook their chicken thoroughly. Also they’re swimming in lakes and streams and may get Campy there.

Explain how a film protects Campy. Campy is a microaerophilic organism, which for growth needs a low-oxygen environment; they’re killed by too much oxygen. If it’s sensitive to oxygen, how does Campy survive on chicken exposed to air? Biofilm.

The biofilm is very gross. Essentially it’s a slimy protective coating over bacteria cells that can provide protection from a variety of things. In the case of Campy, we don’t know what all it provides protection from. Typically, the kinds of things biofilms protect bacteria from include oxygen.

What’s your goal with the grant? This grant is to study how biofilms are made, what they’re composed of. The bacteria start by sticking together and secreting sugars that coat the biofilm as it builds. The sugars are what make the slime. Every bacterium produces a different kind of sugar that does basically the same thing. Our grant is to identify what that sugar is for Campylobacter. Once we know the identity, we can find ways to disrupt it. We can figure out a way to get antibiotics in there to work better and shorten the length of infection.

Do you wash your hands a lot? I’ve become accustomed to the idea that there are bacteria everywhere. My wife is a bit of a germophobe, so she’s a little more freaked out than I am after studying these things for thirty years.

This article originally appeared in our April 2014 issue under the headline “Slime Time.”