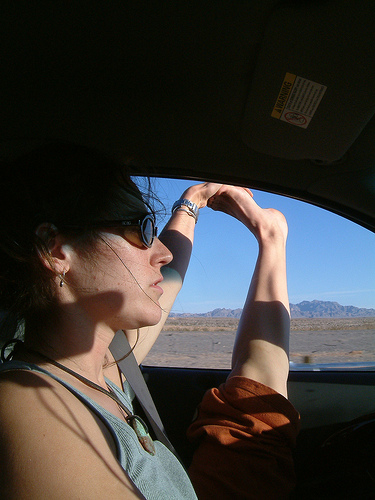 A few months ago, sitting in my 11,845th Atlanta traffic jam, on Peachtree Road, I looked over at another rush hour prisoner and saw something unexpectedly inspiring. A guy driving a plain black sedan had put his seat all the way down and was doing what appeared to be a vehicle-bound version of sit-ups. I watched him knock out three good sets before we started moving again.

I’d been on my way to yoga class—which I’d be missing thanks to an unseen pile-up somewhere ahead—and was moved by Sit-Up Guy’s determination to get exercise in a situation that’s only supposed to get us mad: I attempted a few poses in my own stopped car. Crow didn’t come easy up there in the front seat. Nor did plank, as one might guess. But I’d had my watershed moment: I’d make my Honda Civic into a mobile gym.

A few days later, I tossed a five-foot resistance band into the Civic, knowing I’d hit some traffic later that afternoon, while heading across town. Sure enough, I was at a standstill on Georgia 400 around 4 p.m. But unlike most people standing still in late September, I was sweating. I’d wrapped the band around my non-pedal foot and grabbed the two handles with one hand at a time. I was doing sets of curls and “feeling the pump,” as Arnold Schwarzenegger would say, while sitting on the highway. And, yes, attracting gawkers of my own.

This particular traffic jam only allowed for a few sets of curls, and an abortive set of front seat sit-ups. But over the coming weeks, I added a sort of shoulder press to my vehicle gym routine repertoire. And a triceps extension. All that these exercises required was the resistance band, some ingenuity and a willingness to look silly in a car. Unless you have tinted windows, of course, which I don’t.

I can’t say that exercising while driving (EWD) makes you a better driver, or a safer one. I’ve collected more than my share of beeps and eye rolls over the last eight weeks, as I’ve been slow to start moving again. But I can say that EWD will give you an entirely different kind of burn than you’re used to feeling when stuck in traffic.