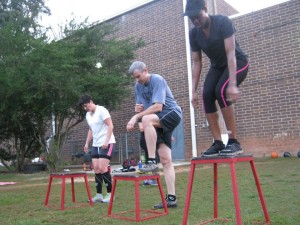 Running, walking, biking, skating, skipping, even dancing along the BeltLine (I saw it a few weeks ago, three guys with a boom box breakdancing their way to Piedmont Park) are all acceptable activities that happen every day. I’ve done all of the above myself, except skate it: I can’t find my old inline skates. Fortunately. (Last time I put them on, at age twelve, I skated down a park slide and broke my wrist.)

Now there’s a new way to move along the BeltLine: In a couple weeks, you’ll be able to lunge, squat, sit-up, push-up, kettle bell, and burpee your way along the path, too, guided by the instructors at FitWit. Started in 2005 by two brothers who taught in the Atlanta Public School system, and first offered in Grant Park, FitWit is a kinder, more community-oriented sort of CrossFit class. Its founders describe it as “group fitness training with an emphasis on individual performance improvement and a commitment to giving back to the community.”

That last part is especially cool: In 2008, the non-profit FitWit Foundation was created to help young people “lead healthy and successful lives.” FitWit LLC donates revenues from every adult fitness camp to the foundation, which then provides free fitness opportunities—beyond hoops and chin-ups in public parks—for at-risk Atlanta youth.

Anyway, the nice folks at FitWit are providing a free sixty-minute group fitness class along the BeltLine on Saturday, November 16, from 11 a.m. to noon. (Funding for this class, and future offerings, comes from a grant provided by the Coca-Cola anti-obesity campaign.) The FitWit class will involve using some equipment, they say—like the step-up platforms pictured above—as well as the natural landscape. I’m curious if they’ll figure out a way to incorporate some of the amazing public art installations along the path, too. Come find out, and let us know what you think.