Home Fitness From delusion to the hospital 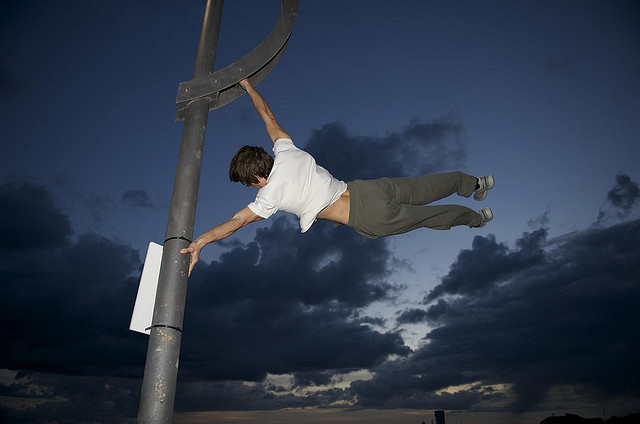 A wiry guy scampers up a smooth wall to the top of a building, then takes a flying leap to another roof, launches off the edge and at the last possible moment gracefully grabs onto a window ledge, drops down twenty feet onto a Dumpster, flips off the side and lands in a perfect crouch.

No, I’m not talking about Spiderman. Not even James Bond in “Casino Royale,” because you just know Daniel Craig’s stunt double wussed out and used safety wires.

The guy I’m talking about, the guy I want to be, is doing Parkour.

Practitioners of Parkour use only their bodies and their surroundings to propel themselves and negotiate obstacles. As Wikipedia goes on to describe it, “Parkour can include running, climbing, swinging, vaulting, jumping, rolling, quadrupedal movement and more.”

I first saw Parkour in 2004 in the French film, “District 13,” starring David Belle, a founder of the Parkour movement. Belle bounces off of walls as he evades thugs, even running down a hallway and smashing feet-first through the window at the top of a door. All of this was done without wires or CGI.

No wires for me, either. Even as a first-timer in the Parkour class at Play Hard gym in Atlanta.

I’m joined by three other badasses. “You taken this class before?” a guy asks, then points to his sister, who is casually dangling from some scaffolding. “We’ve done it a few times.”

I try not to gulp. I don’t want to let on that I’m intimidated.

OK, so this class isn’t exactly death defying. It’s an all-levels, all-ages Parkour class held in the relative safety of a warehouse-style gym equipped with springy floors, marshmallow-y mats and two instructors—Darren Litehiser and Caleb Puca of Team Parlous—who cheer on even the clumsiest student.

We start with the basics. Puca places a series of metal rails a few feet apart, like railroad tracks or very low hurdles. We’re told to “stride” across them, which means put one foot on one rail, then leap to land on the next with the other foot, and continue.

I let the eleven-year-old go first.

Next we practice “vaults,” where we run and try to leap over the mats (legs to the side, feet first, etc.). A mini-trampoline is provided to give us some more lift, and the instructors and students execute perfect flips over the wall and onto a squishy mat.

Trust me when I say that it’s a lot harder than it looks in the video below.

Without realizing it, I’m getting a good workout. The leaps are working my inner thighs. When I push off the mats for a vault, I feel the burn in my wrists and forearms.

As I wipe off the sweat and watch Litehiser and Puca move as though they’re feather-light with springs in their shoes, I’m reminded of an episode of NBC’s “The Office” when Michael, Andy and Dwight play leapfrog and jump on desks yelling “Parkour!” As they head outside to attempt an ill-advised jump off the roof, Jim says,
“The goal is to get from Point A to Point B as creatively as possible. So technically they are doing Parkour as long as Point A is delusion and Point B is the hospital.”

So yeah, I won’t be trying this outside. Maybe after a few more lessons. And only if that eleven-year-old kid goes first.