Home Healthy Living Georgia about to be overrun with mosquitoes 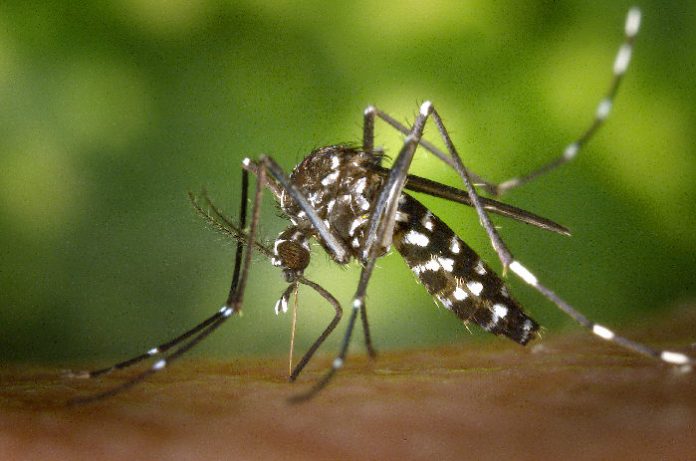 Get out the serious bug spray or resign yourself to staying inside the next few months. All this rain is great for flowers—and, unfortunately, ideal for mosquitoes. Georgia can probably expect its largest mosquito explosion in years, says Elmer Gray, entomologist with University of Georgia Cooperative Extension Service. (There are at least 63 species of mosquitoes in Georgia, in case you were counting.)

Why now?
Mosquitoes require standing water for the larval stage to develop and, as everyone is quite aware, we have had an unprecedented rainfall. Everything that can hold water is holding water. That means potential for a lot of mosquitoes in the upcoming weeks. Plus, it’s the heat of summer and temperatures are going to stay as high as possible for the next six weeks. If the water temperature is warm, mosquitoes get through their life cycle faster and there are more of them out there.

Will we most likely break mosquito records?
There’s not much actual surveillance as far as people trapping and counting how many mosquitoes are out there. The conditions just haven’t been this good for mosquitoes in my recent memory. We’re 12 inches above the rainfall, if not more. We’ve been in such a drought period and we’ve made it up in eight months. That’s kind of unprecedented. That has not only saturated the soil but there’s water holding in places that hasn’t held it in the past.

We’re seeing the Asian tiger mosquito, a container breeding mosquito, where the female lays eggs at the water’s surface in buckets, tires, anywhere holding water. They’re notorious to be aggressive, daytime biters, which means when you go home and get bit by a black and white striped mosquito probably low on your leg, it’s most likely this mosquito. Most other mosquitoes are some version of brown and tan. With the rainfall and as much habitat as they have this year, I’d expect them to be particularly problematic through August.

Does this mean the risk of West Nile virus is up?
Last year was the worst year for West Nile with 100 diagnosed cases and six deaths. But the Southern house mosquito primarily transmits the disease. That mosquito often breeds in storm drains. This year there’s been very little stagnant water in storm drains because it’s all getting flushed out by storms. The peak period for West Nile is August 15 through September 15, so we’re not out of the woods completely. If rain patterns were to shift and it were to stop raining, we could be in store for the normal West Nile pattern.

Do mosquitoes do anything good?
Mosquito larvae are part of the aquatic ecosystem. Fish feed on larva, but mosquitoes are so prolific and will lay their eggs on areas where there aren’t enough predators. People like to note that bats and purple martins like to feed on mosquitoes, but they feed on all the other insects that are out there as well. No studies that show bats or purple martins will suppress the mosquito population.

What about fish?
Most fish like to eat mosquito larvae. Mosquito fish can develop or live in water that has poor water quality. Brim or sunfish like them too, but they need better water quality. Mosquito fish are a biological control option. We use them in areas that don’t have native fish population, like retention ponds by the supermarket. If you walk up to a pond and see fish swim out from the grass around it, typically that won’t be a pond producing mosquitoes. Typically it’s the ponds without fish. It’s not typically a goldfish pond. It’s the tire out by the shed, or the bucket left unattended.

What’s a person to do?
Use EPA-approved repellants. DEET is still the product of choice for as young as children 2 months of age. Its safety has never been questioned. Mosquito control is a growing industry for the pest business. They’ll come out to your property, inspect it, dump out any water-producing areas, then spray around the property to get mosquitoes resting in shrubbery, ivy, or vegetation where they hide during the heat of the day. It’s a viable practice and something the average homeowner can do as well.

When should we be out of the woods?
On toward October 1, when water temperatures start cooling down.