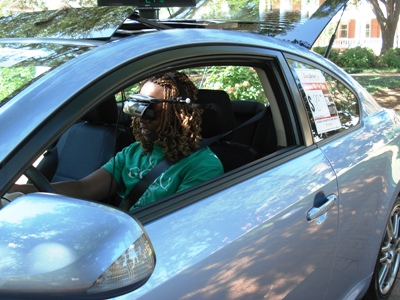 Drinking seems to be part of the college experience.

College administrators try to change that in many ways. At Georgia College in Milledgeville, they use a grant from the Governor’s Office of Highway Safety to bring awareness to issues such as impaired driving, underage drinking, and speeding. It’s the 10th consecutive year the school has received the grant.

What do you do with the money?
Number one, we bring a DUI simulator to campus. It’s a virtual simulator. They get in a real car with gas pedal, brakes. They adjust to what their drinking habits would be: weight, how much they’d drink. It shows defense mechanisms, reaction time, hand-eye coordination, how depth perception is impaired. They are definitely surprised. A computer screen on top of the car allows their friends to see if they hit a car or if they hit a person so they can see how horrible they would be when they’re drinking and driving. We get a really heavy turnout for that.

Do you think it helps?
I don’t know personally if the grant has helped but I know the education efforts have. American College Health Assn National Collegiate Health Assessment (ACHANCHA) Every two years we do a health and wellness survey that looks at drugs, sleeping, mental health, and alcohol. The biggest things we saw from alcohol is that the majority of students are having four or fewer drinks the last time they partied or socialized. It’s now 63 percent. And it was 51 percent. Binge drinking is when a woman has four or more and a guy has five or more drinks in two hours so if it’s under four drinks then that’s low-risk alcohol behavior.

More students are also alternating alcoholic and non-alcoholic drinks. Unfortunately, our blackout rate is still high. In 2009, 42 percent said they had blacked out from drinking. That dropped to 28 percent in 2011 and it’s 29 percent now. That’s still almost 1/3 of our students.

How big of a problem is alcohol on campus? How do you think it compares to other schools?
Our school is located right downtown next to the bars. Close proximity is dangerous for us. Bars are 18 to get in. You don’t have to 21 to get in. They get in and friends give them drinks. There’s also a large Greek population and a close-knit campus, so it’s real easy to get drinks. Some of the liquor stores around campus are notorious for selling to underage students and not looking at fake IDs. On campus our alcohol policies are not that scary. It’s $150 if you get busted for alcohol. I do feel like the students get a lot of alcohol education. Every freshman gets a video on alcohol poisoning.

You obviously can’t stop drinking, but what’s your goal?
My goal is for them to not have alcohol poisoning as much as they do. Every week in our school paper, so and so was in the bushes and blew a .09. Just for these students to know they don’t have to go all the way when they drink and the decisions they make now will impact them after college. We say, “Party with a plan. If you’re under 21, find some other fun.” We try to reinforce it’s illegal for you to drink.