Home Fitness How do you like your head harness? 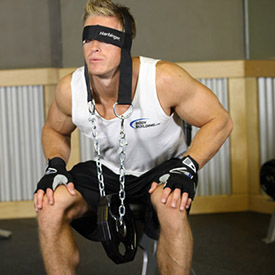 I come from a long line of skinny-necked men. A little taller than average, sure. And, we like to believe, equipped with apt-enough minds. But skinny necks hold up our heads. This has bothered my father since he was a boy. And then he had two boys of his own—taller than him, at least—who also came with skinny necks. Fifteen inches around, no more. Life repeats itself, dad must have thought as we emerged from puberty just like him. Skinny necks!

But wait, there are ways to bend fate. Especially when it comes to bodies. So one Christmas, not long ago, I received an odd gift from dad. As usual, it was not wrapped. He’d taken off the plastic, at least, and stuffed it into a bag. Then covered that with some balled-up pages of the Wall Street Journal. The curious thing was hefty in my hands. And, when uncovered, a wonder to behold. “It’s a neck-strengthening device,” said dad, smiling helpfully. “So you can thicken it up a bit. I saw a guy at the club using one. He said they work.”

It looked a bit like a Rube Goldberg machine at first: straps and chains and Velcro wound together complicatedly. But soon I grasped the basics of it: you wrapped a few straps around your head then attached a dumbbell weight to a chain dangling unattractively from your forehead strap. At that point, you look like you’re on your way to (or from) a medieval torture chamber. But, rest assured, you’re ready to give genetics some push-back—as this guy on the Internet insists skinny-necked men do.

The thing sat in the trunk of my car for maybe two months before I gave it a whirl. Why the trunk? Well, I didn’t want to leave it out in the open in my house, where I’d have to explain it. And putting it in the trunk allowed me to have it handy in case I got brave on the way to the gym one day. Which is exactly what happened.

I walked into the weight room with this thing in my hands. According to one witness, it resembled a weapon. But I put my ear buds in, generally ignored the stares, and started doing a routine like this. My neck hurt a good bit the next day, so it took me another month to repeat the exercise. I haven’t stuck with it since then, to be honest. I hate taking stuff into the gym with me, be it a notebook or a neck contraption.

But one day I saw another guy using his own, and I gave him a look of silent, skinny-necked understanding. Smiling back, he let me take a few reps when he was done. And now, according to the tape measure, my neck is 15 and 1/4 inches. Strange the things that make dads proud.